Yeggman? Was Your Ancestor of That Profession?

Thanks to Jim Kershner's 100 Years Ago Today in our paper a few weeks back, I learned about yeggmen.  So what profession was a yeggman? Perhaps a quote from his article would help:

"The area's gang of yeggmen struck again in the night. It broke into the safety deposit vaults of the Lamont State Bank in Whitman County and made off with thousands of dollars of bonds, securities and other valuables....." 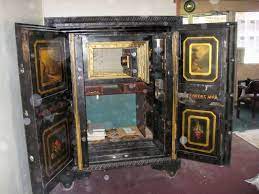 Would you have guessed that a yeggman was a safecracker??? The article went on to state that "one crew of yeggs has been responsible for the theft of a total of $75,000 worth of securities."

Would you be proud of a yeggman ancestor????

Butch Cassidy and Sundance were obviously yeggmen and were pretty cool. At least in that movie.