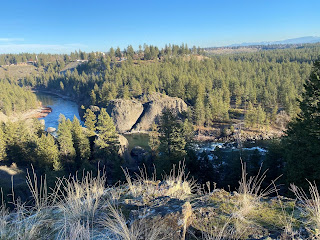 Everybody in Spokane either has been to the Bowl & Pitcher Park or wants to go soon or should go! It's a one-of-a-kind-special feature on the list of things that make Spokane great. My first date with future hubby was a walk across that bridge. How about you? Bowl & Pitcher memories?
Why is it called Bowl and Pitcher Spokane?
The Bowl and Pitcher are contains large basalt rock formations surrounding a turbulent Spokane River. Supposedly, several of the rock formations look like a bowl and a pitcher.
Rushing waters of the Spokane River go through and around the cave. The cave looks like a bowl placed on the side of it brim surrounded by other rocks. On the west side of the river, south of the bowl is a mass of basaltic rock that is shaped like a pitcher. This mass of rock is known as the pitcher of the park.
If you really want to read more about the geology of the Bowl & Pitcher, click to the link below (copy and paste if it won't click on).
https://users.scc.spokane.edu/abuddington/G210proj/2005g3/?p=6
Posted by Donna at 8:30 AM