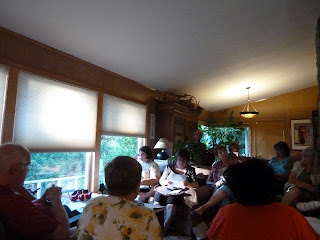 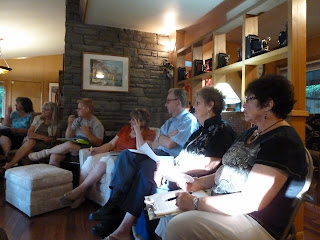 These two photos show some of the EWGS Board and Committee Chair members who attended our annual retreat last week. In our 3-hour meeting, we outlined the Internet/Computer classes for 2014 and we picked and planned the monthly program topics for 2014.......... plus two hours of other business.

This is a hard-working group of folks dedicated to making EWGS be the best it can be and WHY do they do it? For you, the member.

We thank Pat BJ for opening her home to us for the meeting........... and letting us "meet" the resident lady deer who regularly comes to eat the birdseed under her feeders!

Please be sure to visit (regularly!) our website, www.EWGSI.org , to stay tuned to what's going on with EWGS that's of interest and benefit to you. 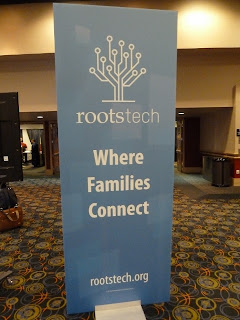 One of the great presentations at RootsTech 2013 was one by Kory L. Meyerink, "Evaluating Databases & Overcoming Their Errors." Here is what Kory said, "Databases are the life-blood of today's genealogists. But, like any other record, they have errors and limitations, but those are often hidden due to the number of names they have. Size also makes it hard to evaluate the value of the information they contain. Here are the secrets and tactics you need to understand and use all the genealogical databases better."

The main question a user should be asking is where did they get that data? Is it from existing data? original records? previously published? newly published? compiled data? new data? previous research by others? government records?

RootsTech 2014 will be 6-7-8 February; Miriam Robbins and I  plan to be among the 5000 folks jamming downtown Salt Lake City and the Convention Center to be in attendance! Might you consider joining us? 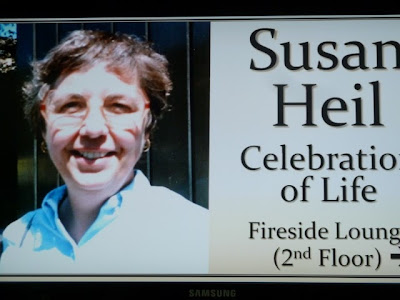 Several EWGS members attended the memorial for Susan Hunsche Heil last Sunday; I was among them. Susan's two children planned a very moving tribute to their mother and we were all glad we went.

Dolly Webb stood and gave a tribute to Susan, a recounting of memories and stories of Susan. "But we have no stories that were Susan's," Dolly said, almost tearfully. "Her children and two lovely granddaughters will never know Susan's stories because she did not write them down."

This was a straight-to-the-heart indictment of all of us who call ourselves genealogists or family historians. Susan thought she had plenty of time to write those stories and enjoyed her time with other genealogical pursuits, with knitting, and other interesting things. I'd bet she always planned to write down those stories.... but the owl came and called her name and now she's gone.......... and with her those stories.

"What about YOU?" Dolly asked the audience. "Will you wait until it's too late and never share those stories and let them be lost forever??" 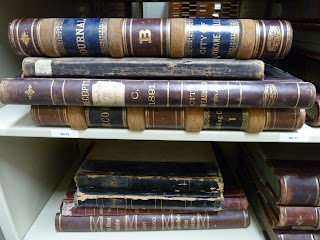 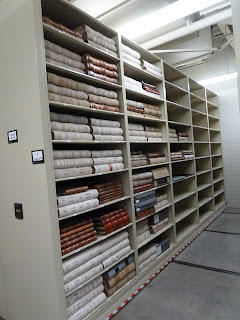 I took these photos at our Eastern Washington Branch of the Washington State Archives...... this facility is out on the EWU campus in Cheney. Looking at the pictures of just some of their archival holdings, wouldn't you suppose that information on your Washington-dwelling ancestor might be hiding in them???

Would you (and I'm principally addressing EWGS members) be interested in a field trip out to these archives as a "regular" meeting some Saturday?? A day for a tour and for research? Let me or your Board know your preference.
Posted by Donna at 7:23 PM No comments:

Well This post is on the vendors and maybe a few comments on the conference. I have never been a big vendor person, maybe because I manned the booth for EWGS publications for years helping my sister sell EWGS books, but few sold, and so got to sit and do nothing for hours sometimes.
Heritage Quest Research Library and the SAR set up Friday night. 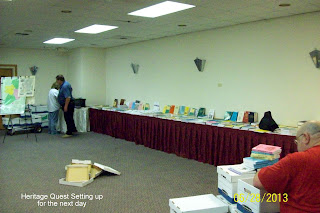 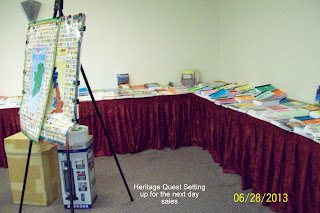 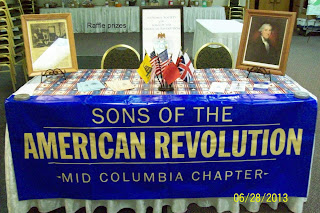 Saturday morning the APG booth was up. 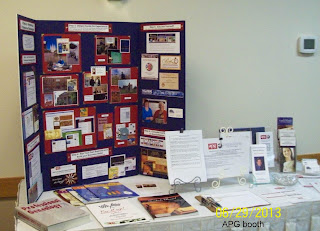 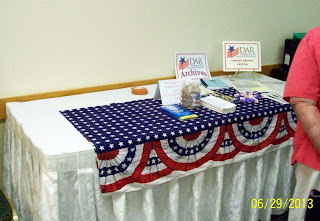 They also had a big table full of Raffle prizes. 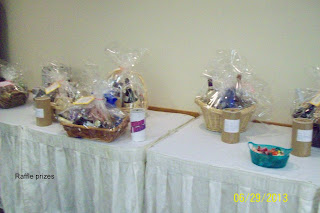 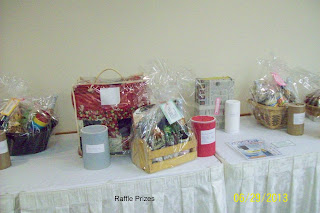 Here is a couple of pictures of the crowd at the
WSGS Annual meeting. I did not get a final number
so I guess we need to count bodies in the pictures. 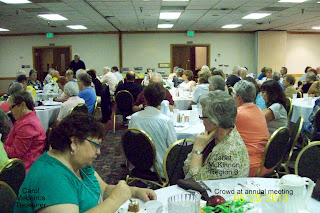 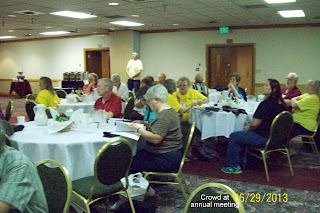 This was an excellent conference, and the main speaker
Bret Petersen was an enthusiastic speaker. Thanks to all
the volunteers at YVGS for your hard work.

Saturday started out early with great breakfast as part of our room rent at the Howard Johnson Motel. They also had cereal, juice, coffee tea and some fruit. 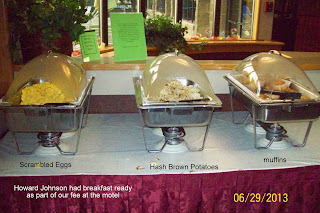 I then wandered through the vender area, but I will do more on that in another post. Our first session was with the main speaker Bret Petersen the main speaker.I thought I had a better picture. 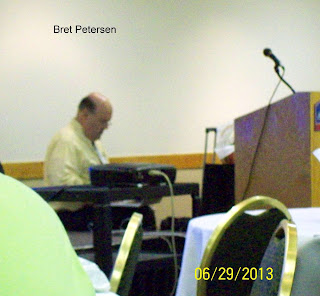 The first session was Using Newspapers in Research: You sNEWS, You Lose. and he gave several examples of items in the newspapers that you might not have thought about. Did you ancestor have a business, so did he advertise in the newspaper? Unclaimed mail lists, where the post office listed unclaimed letters of people that had moved. Letters to the editor, did your ancestor write a letter to the editor about something he was interested in. And of course births, weddings, anniversaries and obits. One of the sources listed was a blog: Online Historical Newspapers Website by Miriam Robbins of EWGS. 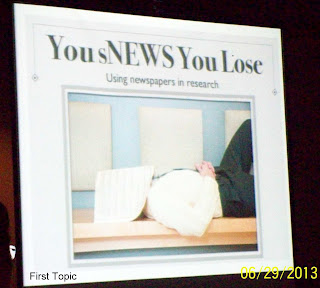 Next was the first of three breakout sessions:
Illustrating Family History When You Have No Photos by Connie Lenzen
12 Tips and Ten Topics in 45 Minutes by EWGS member Shirley Penna-Oakes
and the one I went to: Digging Up New Dirt- Unearthing the "Real" New England Immigrant by Steven W. Morrison. Excellent case study on Deacon John Doane. 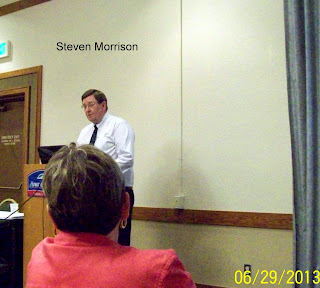 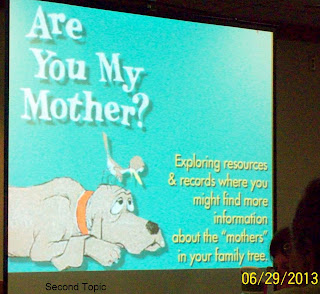 Next was lunch and the WSGS Annual Meeting. The meal was good, but I am not a fan of pasta, and it seems like that is what gets served at a lot of meetings. They read the minutes of the previous meeting, did a treasurers report, and then presentation of awards for outstanding volunteers. Once again EWGS did not submit any. Bob Witherspoon presented the awards and gave me a hint on one for Bonnie McDonald the WSGS newsletter editor, by asking if I could take a picture of the group. 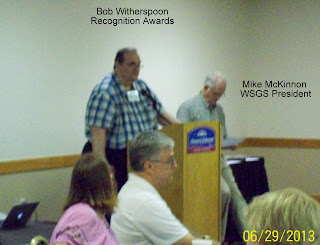 Here is a picture of the volunteers that were present, and all will receive a certificate from WSGS. 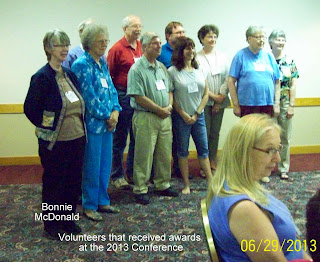 Next was two more breakout sessions:
Family Traditions: The Search for Truth by Connie Lenzen was the one I attended. Connie talked about how true Family Traditions are, and how to prove or disproove the tradition. 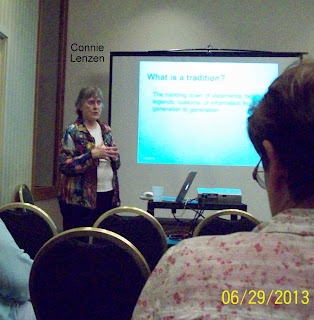 The last Breakout Session
Mama Said  by Susan Davis Faulkner
Brothers: William and Daniel by EWGS member Shirley Penna-Oakes
Genealogists: "Access Denied" by Scott Sackett the one I went to, and I thought I got his picture but it is not on my camera. Scott works at the State Regional Archive at Ellensburg and was a very good speaker on what is happening at the various state archives. He also showed a preview of the new indexing program soon to be online so volunteers can again help index the records in the archives.

The last session was by Bret Petersen The "Shady" Side of the Family Tree Prison, Criminal, Asylum Records and More. Good presentation on the black sheep of your family. The asylum was very interesting, Hard to believe that asylum he showed had 11,000 residents and is almost forgotten now. 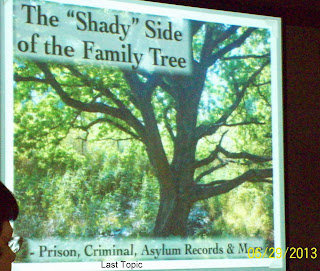 They had some door prizes to give out ( I did not get one) and then we headed for home. Ran into a couple of rain storms one before Ellensburg and the second before Vantage. I did stop an got a box of rainier cherries between the storms, and canned them Sunday morning. This is a rainbow I saw just before the rest stop at the top of the Vantage hill. 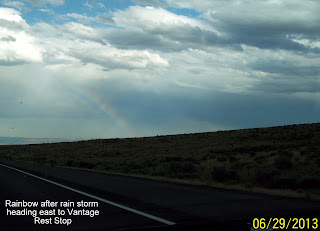 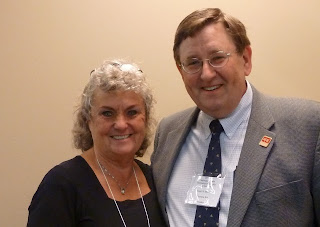 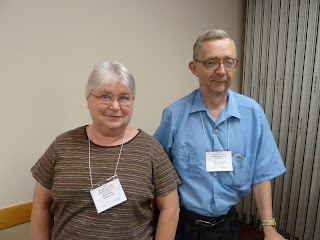 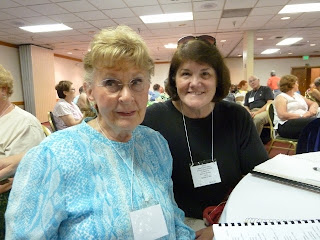 Those EWGS members attending the recent WSGS (Washington State Genealogical Society) conference in Yakima were all glad they made the effort to attend. But only seven of us took advantage of the opportunity: Shirley and Dick Oakes (sorry, didn't get their photo), Marie Walick, Charles Hansen, new members Barbara Jolley and Kathy Bowen and me. I'm standing by Steven Morrison who was and is a great speaker and one we may possibly consider for 2013 with EWGS.

Our state society has a new website host; they've gone to EasyNetSites just like we have. And they have great plans to put more and more features online at their site to make state society membership of more value to us members.

Remember the adage coined by the Washington State Society some years back? You won't KNOW if you don't GO. That is still so very true today. Your next biggee learning opportunity will be our EWGS Fall Workshop in October; don't miss out.
Posted by Donna at 9:42 AM No comments: