This was held at Fairmount Cemetery on July 31, 2010, and the cast researched the people they portrayed picked mainly at random close to the rock chapel for easy walking by everyone, and Fairmount supplied a free barbecue, the weather was threatening, but except for a few showers and a little thunder it was a nice day for a Walk with our Ancestors. 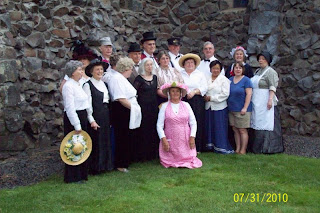 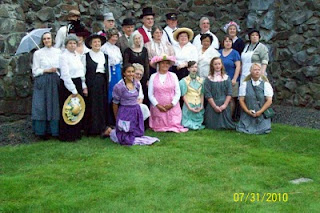 They Portrayed: Ida C.B. Anderson from Sweden, John E. Peterman from Germany and worked for Northern Pacific Railroad, Frank Johnson A civil War soldier that was a body guard for Abe Lincoln, Florence Harris, Charles K. Monfort a Carman for street railways. This group was all along the GAR Avenue. Harriet Ham and Maud Lulu Parks were both children that died of Scarlet Fever, Edgar Jerome Webster another Civil War soldier and first President of Fairmount Cemetery, Christiana H. Ellis who married Norman J, Merriam, Matilda M. Holly married Joseph Holley another Civil War Vet who was part of the Holly Mason hardware store in downtown Spokane, Adella Louella Kenward Wetzel who married Daniel Florence Wetzel and died after surgery, Francis and Lucy Tull owner of the Tull block in downtown Spokane, Elizabeth and Thomas Tannatt another Civil War Vet and she founded the Esther Reed DAR chapter here in Spokane. The last group was Robert W. Forest the first Mayor of Spokane and another Civil War Vet with a free military tombstone for the millionaire landowner, Barbara Wirt Clarkson a former EWGS President and accountant, Rudolph Bowman Scott a black man that was in the Navy in the Civil War, The Rundel Family Jennie and Osmer C. Rundel from Michigan and New York, James Albert and Melissa English Crisler pioneers of Valleyford, V. Eltinge son of one of the men killed in the worst avalanche to ever occur near Wellington, Washington 96 people were killed 35 passengers and 58 Great Northern employees, and Andrew Jackson and Harriet Robinson Ross Gandy he helped build the first railroad to Spokane and helped found the first newspaper in Spokane with his friend J.J. Brown. 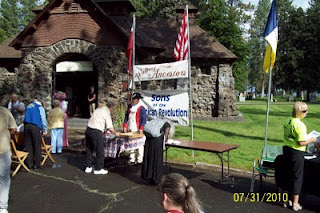 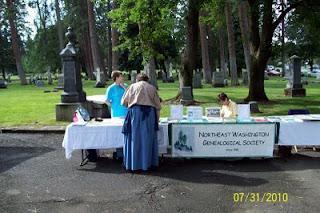 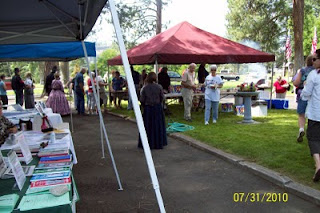 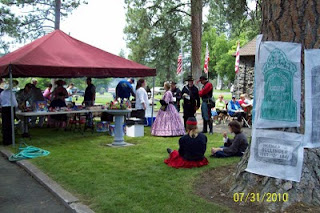 Thanks to Shirley Penna-Oakes the organizer of this wonderful Walking with Ancestors and all the other volunteers that helped to make this a success, hope to see you all back next year.
Posted by Charles at 8:32 PM 2 comments:

FamilySearch’s microfilm conversion initiative is beginning to sail. Over 12 million digital images from thousands of microfilm, representing 8 countries, were published online for free viewing this month. FamilySearch’s online image viewer makes it easy for online patrons to view the newest digital images from Argentina, Costa Rica, France, Luxembourg, Mexico, the Netherlands, Puerto Rico, and Spain.
This week the complete U.S. 1910 Federal Census name indexes for Idaho, Montana, Nebraska, North Carolina, Oklahoma, and Missouri were also published online at (FamilySearch’s Record Search pilotFamilySearch.org, click Search Records, and then click Record Search pilot) and coming soon to Beta.FamilySearch.org.
See the chart below for the complete list of all the newly added or improved collections.
FamilySearch plans on digitizing and publishing online the bulk of its 2.4 million rolls of microfilm—representing 132 countries. In addition, it is now capturing millions of new images each year digitally “at birth” from its 185 field camera teams worldwide. It all translates to a steady stream of new digital image collections for genealogy enthusiasts to anticipate and enjoy.
About FamilySearch
FamilySearch International is the largest genealogy organization in the world. Millions of people use FamilySearch records, resources, and services to learn more about their family history. To help in this great pursuit, FamilySearch has been actively gathering, preserving, and sharing genealogical records worldwide for over 100 years. FamilySearch is a nonprofit organization sponsored by The Church of Jesus Christ of Latter-day Saints. Patrons may access FamilySearch services and resources free online at FamilySearch.org or through over 4,600 family history centers in 132 countries, including the main Family History Library in Salt Lake City, Utah.
Posted by Miriam Robbins at 5:56 PM No comments: 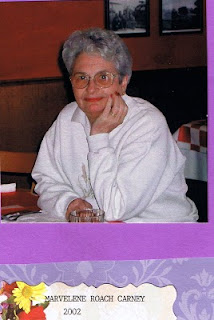 Marvelene E. Roach Carney was EWGS President in 2002 and 2003. On March 1, 1952 Marvelene married Frank James Carney a staff sergeant in the US Air Force stationed at Fairchild, AFB. Frank was from Chicago, Illinois and when he left the air force he worked as a sales man at several auto and recreational vehicle dealerships. They had three children, two daughters Denise and Judith and one son Thomas. Frank died May 6, 1998 in San Bernardino, California while on vacation. Marvelene was a nurse and there is a nice article in the Spokane Chronicle September 7, 1968 "49 New Nurses Enter Deaconess School of Nursing" and Marvelene is one of those listed. Marvelene was an author of a surname booklet by Carney Notepad Publishing called Roach Discovery. Marvelene also collected and indexed the 1991 obits for the 1991 Patchin Book. In 2000 Marvelene became an EWGS Distinguished Service Member for all her work as Vice-President, a library helper, chairing many seminars and workshops, and educational classes.
The 2002 spring seminar was Richard L. Hooverson at thje West Coast River Inn (Now Red Lion River Inn) April 20, 2002, cost $30.00. June 1, 2002 at the Davenport Hotel EWGS celebrated the reopening of the Davenport with Tony and Suzanne Bamonte, cost $25.00. The October workshop was Craig Scott on Military History at the Days Inn October 5, 2002, cost $30.00. Since EWGS had such poor turn outs for the 2002 seminars the December 2002 issue had a survey on how attendance at seminars was dependent on the cost of the seminar. Turned out many said the cost of the seminars was getting too expensive, so due to poor attendance at the 2002 seminars the spring seminar was canceled. March 31, 2003 the City of Spokane Valley was incorporated and that would be a big boost for EWGS, but I did not know that till later in the year. At the May 2003 general meeting dues were raised to $25.00 a year or $375.00 for lifetime starting with the January 1, 2004 dues. In early July I received a note in my mail box at the library from the Spokane County Auditor was looking for a genealogist to help with genealogical queries that the auditor received because of the new city of Spokane Valley being incorporated, which cut the county income by nearly a third so every department was asked to find ways to save money. The next Monday I was reporting for jury duty at the courthouse, so before I became a juror again, I stopped at the auditors office and volunteered. I handled all the requests and all the money I collected after copy costs went to EWGS. Turned out to be a big boost for the EWGS book fund. The October workshop was at Spokane Falls Community College October 4, 2003 and it cost $35.00.
The next EWGS President was Bette Butcher Topp in 2004 and 2005, and I already wrote about Bette so check out her blog post. In 2004 two new EWGS Distinguished Service Members were announced, I was one and the other was Dorothy Braithwait, I think we were both nominated by Bette and Marvelene. Thanks Bette and Marvelene. Both of these EWGS Presidents are hard workers, very excellent genealogists, and great supporters of EWGS.
Posted by Charles at 9:55 AM 1 comment:

FamilySearch Indexing is excited to announce that our dedicated volunteers have completed 100 million records in the first half of 2010, and is on track to complete a targeted 200 million by the end of the year. Patrons can search the completed indexes and images at pilot.familysearch.org.

Interested volunteers can start helping any time by registering at www.indexing.familysearch.org and selecting a project.

New Projects in the Past Month

(See the chart below for a complete list and current status of all indexing projects.)

(Note: Recently completed projects have been removed from the available online indexing batches and will now go through a final completion check process. They will be published at pilot.familysearch.org in the near future.)
Current FamilySearch Indexing Projects, Record Language, and Percent Completion

FamilySearch International is the largest genealogy organization in the world. Millions of people use FamilySearch records, resources, and services to learn more about their family history. To help in this great pursuit, FamilySearch has been actively gathering, preserving, and sharing genealogical records worldwide for over 100 years. FamilySearch is a nonprofit organization sponsored by The Church of Jesus Christ of Latter-day Saints. Patrons may access FamilySearch services and resources free online atFamilySearch.org or through over 4,600 family history centers in 132 countries, including the main Family History Library in Salt Lake City, Utah.
Posted by Miriam Robbins at 9:32 PM No comments: