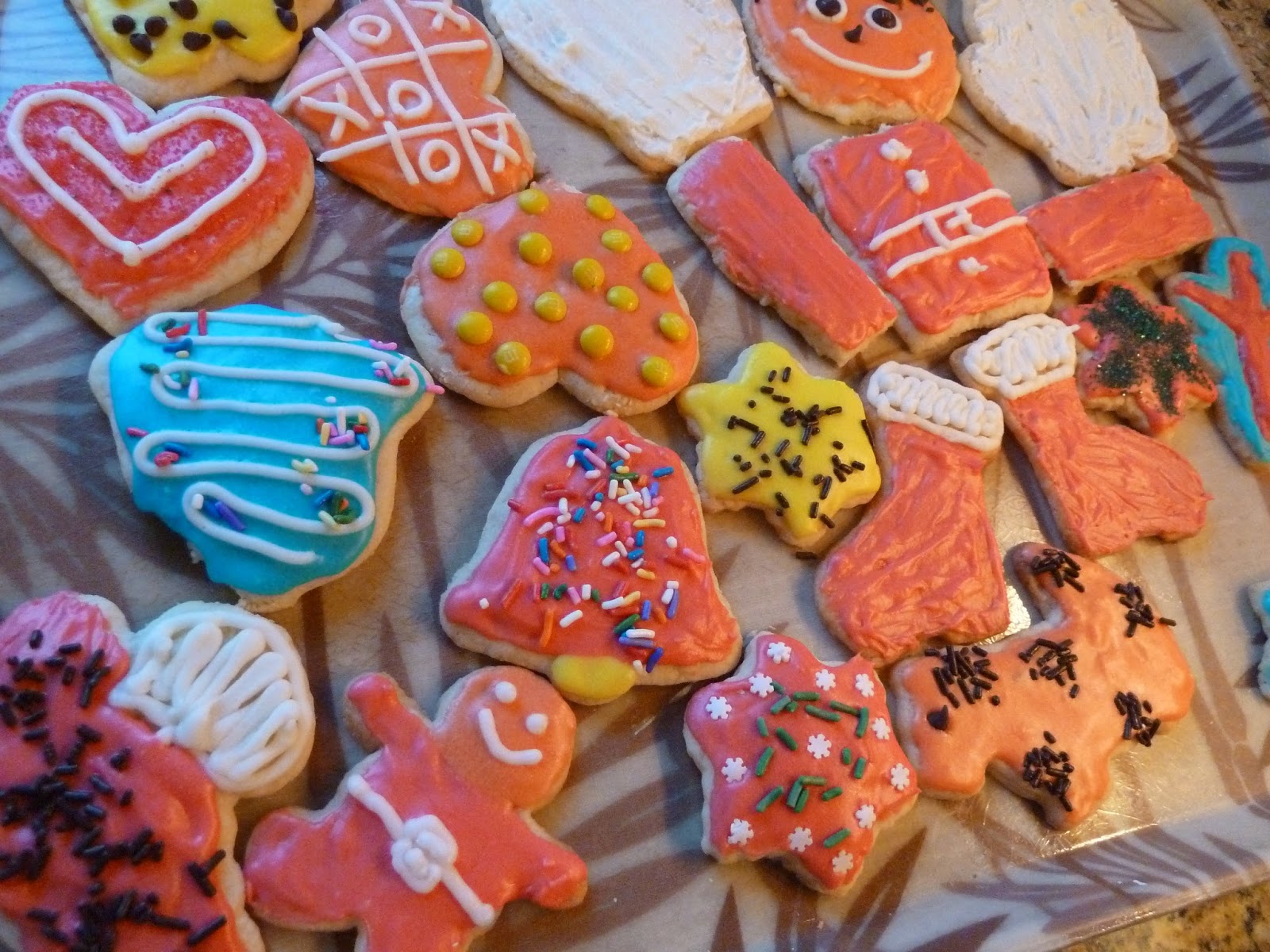 Super year-end event.  Our EWGS members will share stories and tips from their own experiences. They will tell us about their research rewards and the excitement of learning details about their ancestors. Also combined with this program will be a "show and tell" session.   Door Prizes!!
Cookies and coffee time begin at 12:30 p.m.  Meeting starts at 1:00 p.m.
Please bring 18 or 24 of your favorite holiday goodies for our cookie swap.  No store bought please. If there is a story you have,  like about Great Grandma's Spritz Cookies, please write a recipe card and the history.  Don't forget to sign your name, and add it to your plate. Plans are in the works to make a EWGS cook book.

Can't bake? Don't worry there will be plenty, relax and enjoy, this is a party!

Please bring your family treasures to display and to tell us about. This just might just give you some ideas of what to do with that ephemera you've collected. Please also let me know if you are bringing a family treasure to "show and tell."

If you have questions about our party, or would like to tell me about the family treasure you plan to bring, give me a call, Mary Holcomb,  mkholcomb@live.com or call 509-327-5337.

"She enjoyed being in the limelight!"  Ever heard that? Any idea what it meant or where the term comes from? Here's the answer:  Limelight was once used to illuminate the stages of theaters. A brilliant light resulting from burning lime transformed the actors on stage in such a way that the audience knew they were witnessing something special. Now you know? I wonder how burning lime smelled???

Super year-end event.  Our EWGS members will share stories and tips from their own experiences.  They will tell us about their research rewards and the excitement of learning details about their ancestors.  Also combined with this program will be a "show and tell" session.  Door Prizes!! Cookies and coffee time begin at 12:30 pm.  Meeting starts at 1:00 pm
Program: Holiday break: bring 18 or 24 of your favorite holiday goodies.  No store bought please.  If there is a story like Great Grandma's spritz, please write a recipe card and the history.  Don't forget to sign your name, and add it to your plate.  Plans are to make a EWGS cook book.
Can't bake?  Don't worry, there will be plenty.  Relax and enjoy...... this is a party!
Display of family treasures that might just give you some ideas of what to do with those ephemera we genealogists collect.
If you have something you would like to share, please contact Mary Holcomb mkholcomb@live.com
or call 327-5337.  We want to have plenty of space to display our treasures.  And more treasures are needed.

Take some of your extra or relaxing time over the holidays to do some personal enrichment or learning. How much do you know about the FamilySearch Wiki? 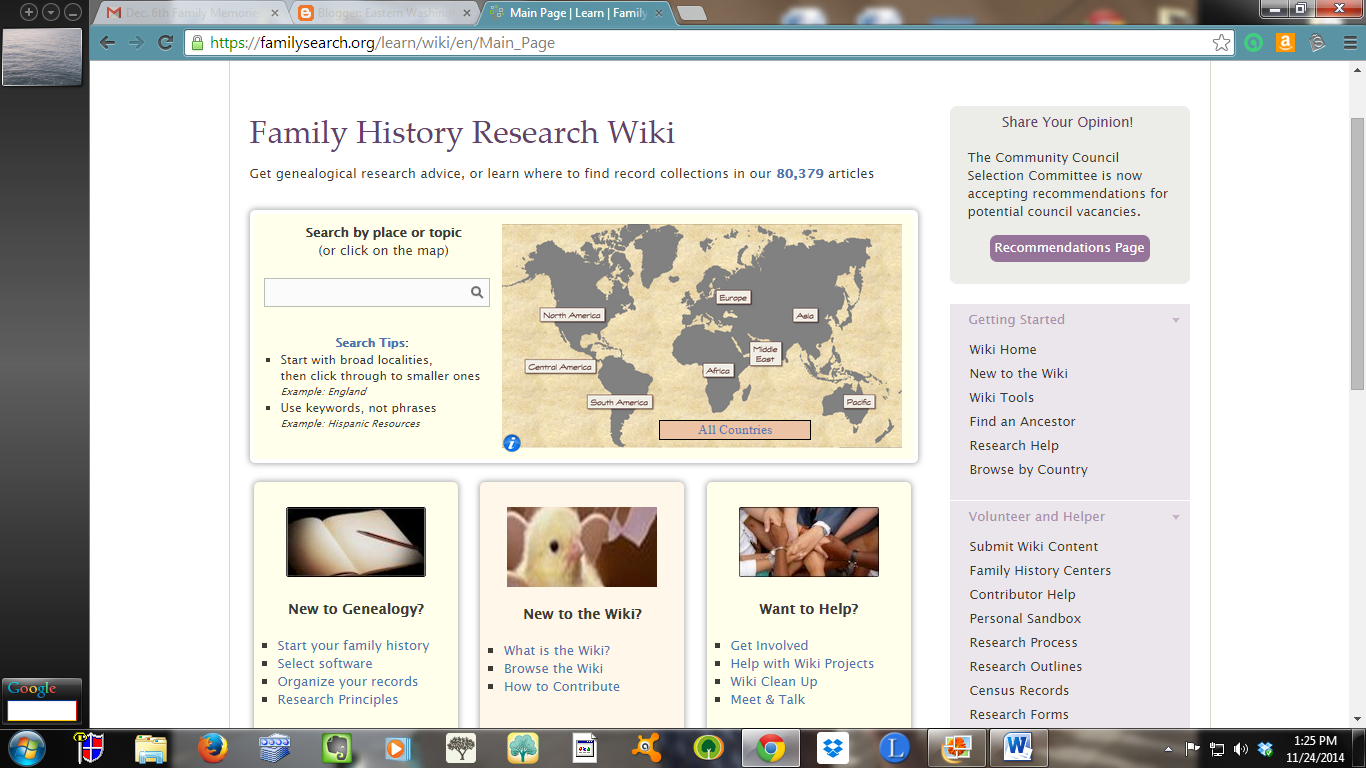 The Wiki "is not about finding the names of your ancestors.  It is not, in fact, about finding people at all.  The Wiki is about finding records that may have been generated about your ancestors and the places in which the records might be found."     This is a quote from the website, www.FamilySearch.org. .  The FamilySearch Wiki is a "place-records-tutorial & how-to" place for learning.

Who Pushed Thanksgiving To Be A Holiday?

Just how did Thanksgiving become a national holiday? With big thanks to American Spirit, magazine of the Daughter of the American Revolution, Nov-Dec 2015, for this information (from which article I liberally quoted).

We can thank Sarah Joseph Buell Hale who convinced President Lincoln to issue that famous proclamation.

Sarah Josepha Buell was born in New Hampshire in 1788. In 1813 she married David Hale who left her a widow with five young children in 1821.

Having to support her children, Sarah took to writing was was successfully published. While she was self-educated she pushed for women's rights and wrote many editorials using her authority to promote a variety of causes she was passionate about.

In 1837, Sarah wrote the first of many editorials aimed at making Thanksgiving a national holiday. At the time, it was observed at the state level, usually on the last Thursday in November. Sarah kept up her efforts through the 1840s  and in 1860 she wrote, "This year the last Thursday in November falls on the 29th. If all the States and Territories hold their Thanksgiving on that day there will be a complete moral and social reunion of the people of America in 1860. Would this not be a good omen for the perpetual political union of the States? May God grant us not only the omen but the fulfillment is our dearest wish!"

The clouds of the Civil War were gathering on the horizon and Sarah felt them keenly and dreaded what the war would bring to her country, family and friends.

After one more letter to him in September 1863, finally on October 3, 1863, President Abraham Lincoln issued a proclamation making the last Thursday in November a national day of Thanksgiving.  Not fully satisfied, Sarah continued her efforts into 1871 pressing Congress to enact legislation proclaiming a set date for Thanksgiving.

When you gather friends and family, and serve that roast turkey this year on November 27th, remember Sarah Josepha Buell Hall for helping establish this holiday.

Remember, too, that in the fall of 1863 the war was raging and yet President Lincoln took time for this. That tells me how important this day really is.  Donna
Posted by Donna at 11:56 AM 1 comment:

EWGS Makes Money From YOUR Shopping!

EWGS, now approaching their 80th birthday continues striving to provide their members, and the community, educational and self-learning growth opportunties.

We do this by being able to have the funds available to support workshops, research classes and seminars to mention just a few activities.

One way to acquire these funds is to develop partnerships with vendors that offer products and genealogical research tools.   In return, these vendors give EWGS a small referral fee for each sale they get from our referral.   We carefully select companies that we feel reflect our dedication to genealogy research  to help our members and the community with their journey in finding their ancestors.

On our web site, EWGSI.org you will find a new TAB:  Shop and Support EWGS.  The companies we currently have partnerships with are: Ancestry.com, Fold3.com, GenealogyBank.com, Newspapers.com.   We hope when you are joining or renewing services from our partners, you will remember to access them through our web site.

You can also qualify for discounts from some of our partners which are available through our web site. If you know of any company that shares our interest in genealogy please let our web managers know so they can add them to our partnership program. You can contact them by emailing to: webmanager@ewgsi.org
Posted by Donna at 3:41 PM No comments:

Here's another spotlight on the EWGS meeting you might have missed on November 1st, 2014. 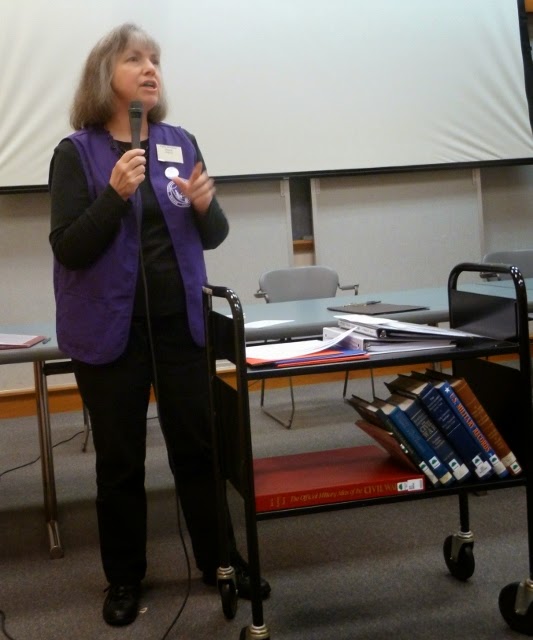 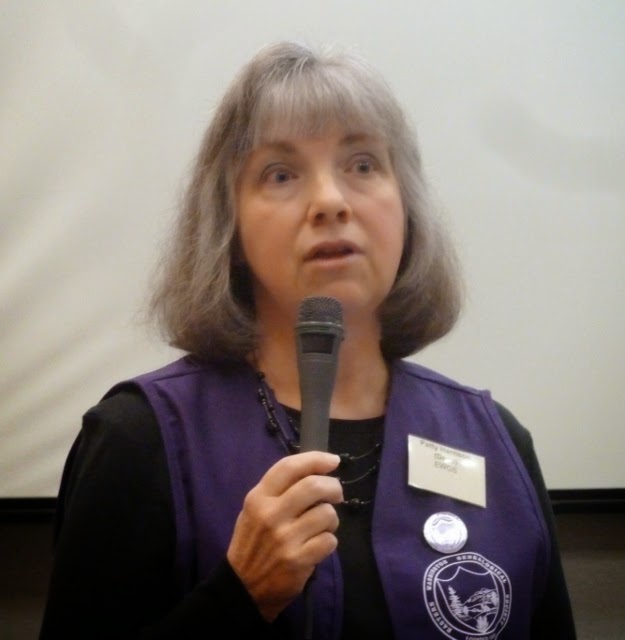 Patty Dana Harrison has been an EWGS member for a long time. A couple of years ago she launched a project to coordinate among EWGS members the companies or units that their Civil War ancestor might have fought with. Great idea, Patty!

At the meeting, Patty told us that of the EWGS members who have registered their ancestor's unit there has already been two matches! As this project is on-going, you can still add your ancestor's information into this database. To request the form, email Patty at customstitchesbypatty@hotmail.com .

Her handout for that meeting carried a nice list of Internet resources to use when searching for information on your Civil War ancestor. She brought to the meeting room a cart of books from the upstairs Genealogy Section that deal with the Civil War and are helpful to finding and documenting your Civil War ancestor's service. (Visit the downtown Spokane Public Library on a Tuesday when EWGS volunteers will happily assist your search.)

Thank you, Patty, for managing this project so thoroughly and so enthusiastically and we'll look forward to many matches in the future!

The database will eventually be accessible from our EWGS website.  Stay tuned.

And did you notice that Patty is wearing her EWGS vest???
Posted by Donna at 8:50 AM No comments:

National Archives Day in Sweden is on the second Saturday of November each year. The regional archives are open to the public offering lectures, exhibitions and archive tours.

ArkivDigital, your online digital archive with more than 50 million images, will be hosting an “open house” this week-end. We invite all who are interested in their Swedish history free access to our entire online historical archive on Saturday and Sunday (November 8-9, 2014).

Take the opportunity to discover the wealth of records in the archive including the church books, estate inventories, passenger ship manifests, military records, court records and many other types of records.

All current subscriptions will be extended two days because of the two free days.
Posted by Miriam Robbins at 6:51 PM No comments:

EWGS member (and SAR member) Dale Ryan came to the November 1st EWGS meeting with a bundle of flags and flag polls and gave us a great lesson on Civil War Confederate flags. He first explained how important flags were in those battling days of no communication. "Flags were the rallying point for the company; flags were the means of communication. Through the smoke and haze of the battlefield, men would look for their flag and run towards it." 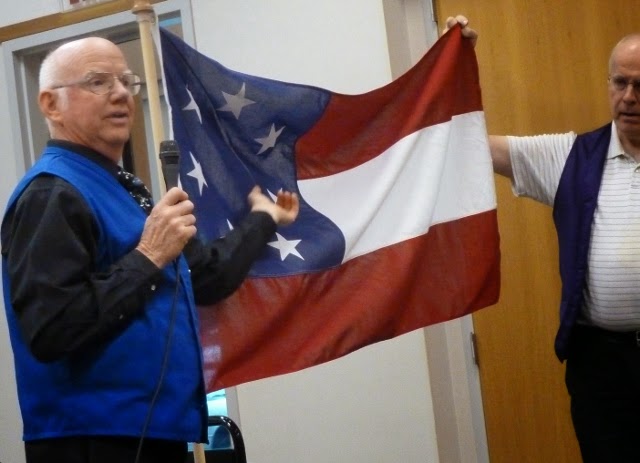 Dale, with help from John Wilson, showed us the first official Confederate flag. "The trouble with this flag was when it was hanging limp on its pole it looked too much like the U.S. flag. Not good for Confederate soldiers to run to the wrong flag!" 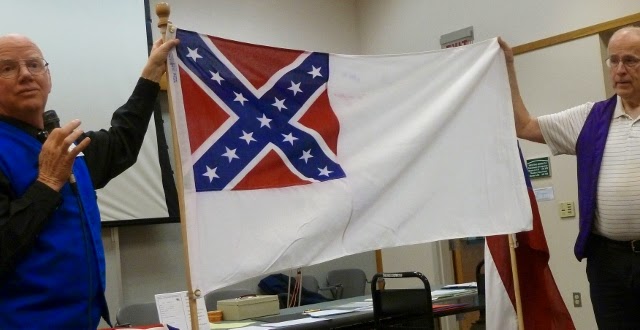 This was the next "official" flag, but again, "hanging loose it looked too much like a flag of surrender. Again, not good in battle." 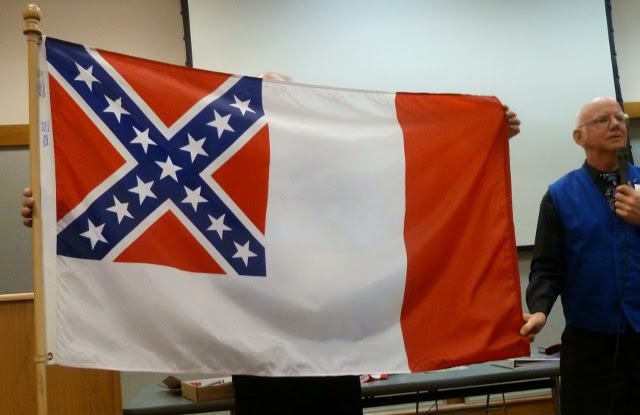 This was the final "official" flag and it was okay "but by then most everybody was using the one we recognize today, the one called the Stars & Bars." 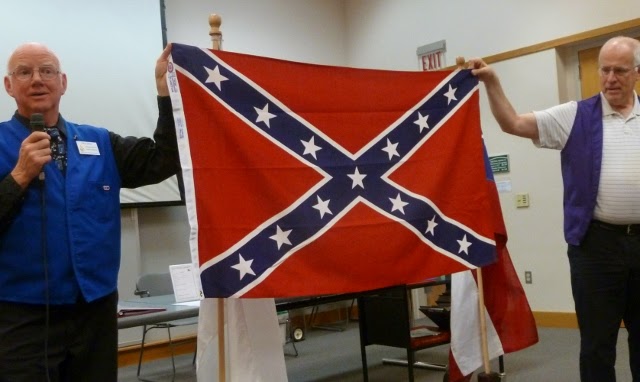 Even as this Stars & Bars flag was never the official flag of the Confederacy, it is forever associated with the southern states and the Confederacy.

Thank you, Dale, for giving us this Civil War history lesson!
Posted by Donna at 9:42 AM 1 comment: