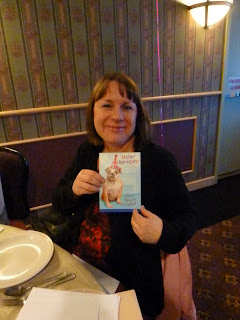 Our own Miriam Robbins (photo taken last summer at her birthday party) has stepped up and will teach the computer class on November 19th. The subject will be "Civil War Research: An Overview." You must be an EWGS member and you must register by emailing Miriam at kidmiff@aol.com. Sessions are 10:15-11:15 and 11:30-12:30.

Interested in Spokane history? How about the history of the Spokan Indians? John Alan Ross's new book, The Spokan Indians, is the 892-page result of his four decades of work on the subject. Cost for the book is $30; can be purchased online or at local bookstores (like Aunties).

The Spokesman Review carried a blurb about the need for photos of Washington veterans to accompany their memorial in Washington DC at the new Vietnam Veterans Memorial Wall. Photos are needed for:  Air Force Col. Gallileo Bossio, or Deer Park;   Marine Pvt.1st Class Rocky Hanna of Addy; Army Pvt. 1st Class Melvin East, of Colfax; or Navy Lt. Cmdr. Edwin Koenig, of Spokane. If you have photos of these men, or know somebody who might, you are requested to contact www.vvmf.org/pafwan or call (800) 562-0132, option 1.

EWGS Does Nothing For Halloween 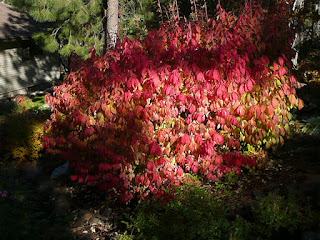 This is a Burning Bush in my back yard. It always "burns" about Halloween time and I call it my Halloween Bush.  It has nothing to do, really, with genealogy, except that it reminds me, as does the Halloween holiday, that our "wonderful" Spokane winter is coming and is a dandy time to re-dedicate myself to doing some serious study on my genealogy. The yard and garden is put to rest, the number of have-tos involving travel slows way down and what else is there to do........that's fun?

I invite you to the EWGS meeting on November 4th, downtown Spokane Library, 12:30........ with almost-free parking down/west on Main street. The program will be "Researching A Place Online." All of us have the situation of needing research knowledge or help "there" (say Georgia) when we live "here" (say Spokane) and this presentation is planned to help you deal with that distance obstacle.

Then our EWGS comptuer class (for members only) on November 19 will be the last one for 2011. Email Miriam Robbins (kidmiff@gmail.com) to sign-up for this class.

EWGS is there to inspire you, to help you, to guide you..... all that is necessary to enable you to have the skills to find those rascally ancestors. And with knee-deep snow outside, winter is a good time to dig into your genealogy...........and with EWGS help, you'll find answers!
Posted by Donna at 10:57 AM No comments:

On Saturday, Oct 1st, at our annual Fall Workshop, Dr. George Schweitzer came from Tennessee to teach us all about the Civil War............ the causes, the depth of feeling on both the Union and Confederate sides, and then spent an hour teaching us how to research our Civil War ancestors. With this being the 150th anniversary of the Civil War (1861-1865) you will find that EWGS will be offering programs and emphasis on Civil War research.  (And please don't whine that YOU do not have any Civil War ancestors..... help your neighbor! your son-in-law! your cousin! Bet they do.)

Internet Genealogy  magazine for Oct/Nov 2011, page 6, had a nice, concise, blurb about Footnote.com's trasformatio to Fold3.  "Footnote.com, a preer destination for discovering family history records, recently announced it will now focus primarily on offering the finest and most comprehesive collection of U.S. Military records available on the Internet. And why not? The records that they are making available come from our U.S. archives.

Fold3 is a "subsidiary" of Ancestry.com and currently offers a free basic membership...... give them a try! And, by-the-by, the name Fold 3 derives from "the third fold in a traditional military flag folding ceremony.........."

EWGS/SPL subscribes to Internet Genealogy and you can view this issue in the Genealogy Section of the downtow Spokane Public Library. Go down on a Tuesday whe EWGS helpers are volunteering.

ONE MORE THING:  At the workshop, somebody mentioned this new (new-to-me?) website:
www.civilwarprisons.com . There were some 150,000 Civil War prisons and this website is proposing to find and post names from all of them . Currently, only Andersonville, Cahaba and those from the Sultana Disaster are posted there. But might put this in your list of favorites and check back????
Posted by Donna at 2:26 PM No comments:

If you are a Legacy Family Tree genealogy software user, or are simply curious about this genealogy software program, you may be interested in the Legacy Users Group (LUG), which will meet next Wednesday, October 19th, from 1:30 to 3:30 PM in the meeting room of the Shadle Park Branch of the Spokane Public Library at 2111 W. Wellesley. This meeting is free and open to the public. Regular attendees will take turns in the role of moderator for each meeting.  If you have more questions, please contact Donna Potter Phillips here.

View Larger Map
Posted by Miriam Robbins at 2:00 AM No comments:

The 30th Anniversary of the founding of the North East Washington Genealogical Society was October 8, 2011. It was a nice sunny day and so I headed north on the new North Spokane Corridor, first time I have ever been on it. Arriving in Colville I stopped at the farmers market then headed for the Ambulance Shack near the north round about on 395. They started with a greeting from current president Karen Struve and then we headed for the cake and punch. They cut the cake in large pieces (not large enough as they had a lot left over) and we continued to talk to our fellow tablemates. Susan Dechant then did a power point presentation "Through the Years" on the history of NeWGS. Nancy Wright did a reading from the book the Last Bell (schools of Stevens County) and then we were to have a sing along, but time had run out by then, darn. 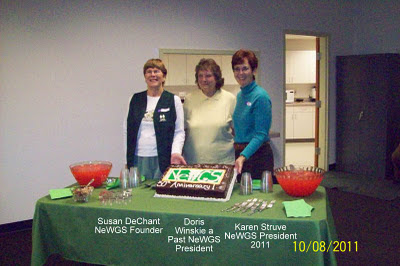 As the research person for EWGS I have interacted with a couple of people in the NeWGS on a regular basis, we try to help each other when the research moves to the area we each research in, so when I heard that the NeWGS was having a 30 year anniversary and that Susan Dechant was one of the founders of the NeWGS I decided I would go. Turned out another founder was Shirley Dodson the other person I regularly contact at Colville so I was thrilled that both Susan and Shirley and her husband Tom were honored with Lifetime Achievement Awards. 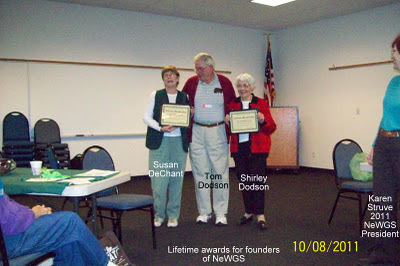 We at EWGS always complain that few people from the coast ever come to our meetings, and yet we do the same with other societies in our area.
Posted by Charles at 11:08 PM 1 comment:

EWGS 2011 October Workshop "The Yankees vs the Rebels"

Saturday October 1, 2011 the Fall EWGS workshop. The speaker Dr. George Schweitzer and his subject the Civil War. The workshop was at the Country Homes Christian Church at 8415 N. Wall in Spokane, Washington.


The first session was on the background and causes of the Civil War. Almost everyone knows that slavery and preserving the union were important causes, but he told of one I don't think I have heard before. The election of 1860 elected Abraham Lincoln, but it also eliminated the majority of Senators that the south had enjoyed since the Revolution. 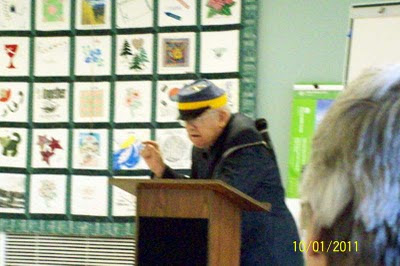 He then went on to talk about slavery and the Constitution and the views of the founding fathers, Most did not want slavery and they tried to get it eliminated in the Constitution, but the southern states refused to sign if it mentioned slavery. My favorite quote was from Benjamin Franklin in 1789: "Slavery is such an atrocious debasement of human nature, that it may sometimes open a source of serious evils", and of course 72 years later the Civil War starts "a serious evil". 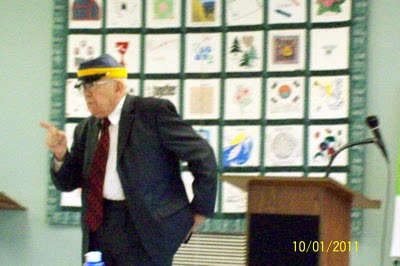 Notice the hat above, this one is a Confederate cavalryman hat and now he is giving the Southern Interpretation for the Civil War. Dr. Schweitzer tells how god has made slavery in the south such an astounding commercial success he must approve of slavery. Also the slaves are much better off than the Negroes back in Africa, our slaves are guaranteed food, shelter, clothing, and care in their old age.
The south also said they entered the union freely and had every right to leave when they wanted. 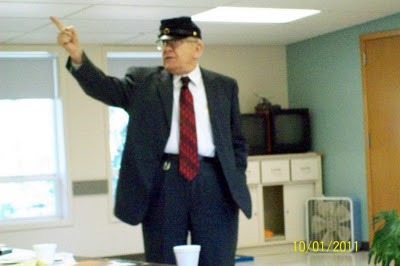 Notice this hat above it is a Yankee artillery hat, and here Dr, Schweitzer was giving the Northern view, that the Union was meant to be perpetual and that god has done nothing to perpetuate slavery, but slaves in the bible were whites, so if slavery is in the bible it follows that there should also be white slaves owned by blacks. So the south fought believing god sanctioned slavery and the north fought believing god wanted a perpetual union.

This is after the break and while it is a bad picture of Dr. Schweitzer it is a good one of former EWGS President Ruby McNeil. In the Walking with Ancestors pictures I took all of those I took of Ruby were of her back 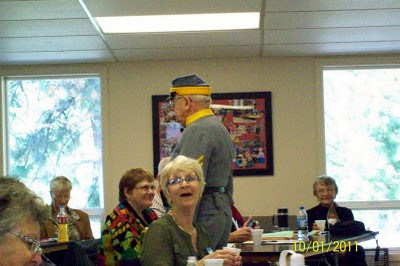 This uniform is a Confederate cavalryman, the yellow band on the hat signifies cavalry, he was a corporal two bars v shaped on the sleeve of the top. He explained companies of 100 men, regiments of ten companies and brigades.
He also talked about sources for researching your Civil War ancestor, and the fact that while the south lost the war they have won the records war, they have many more records microfilmed that the north. 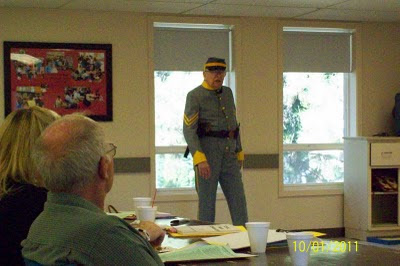 Next was lunch, and a wonderful pot luck lunch, my sister and I brought a cherry-rhubarb pie and I guess it was well received as it disappeared quickly.

After lunch Dr. Schweitzer appeared as a Yankee Artilleryman, a sergeant. Three red stripes in a v on the sleeve signify an artillery sergeant. He then went on to tell about where to find information on your Yankee ancestor. 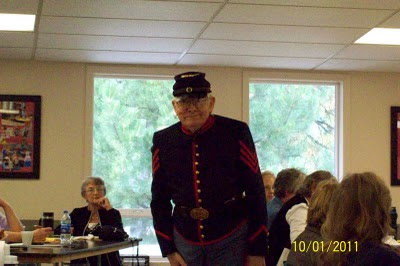 Posted by Charles at 8:46 PM No comments: