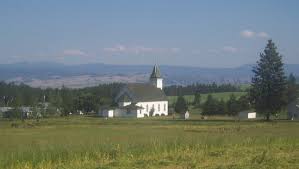 Yes, long time EWGS member (and past president), Jeanne Polumsky Coe, has an ancestral line going back to this bitty place in Idaho County, Idaho.  We were doing our volunteer indexing stint down at the MAC when we came upon an obit that stated that the fellow was from Keuterville. That sparked a lovely memory from Jeanne and she wrote up the story for us. 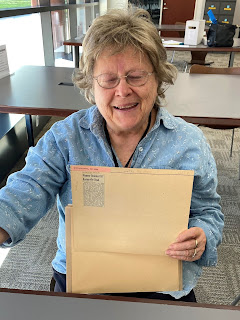 How Keuterville, Idaho, Got Its Name

“The small town of Keuterville, in Idaho County, Idaho, was named after my great-grandfather,” wrote Jeanne Coe. “His surname was spelled KUTHER but the request for the town’s name change was garbled and the government spelled it Keuterville. It’s now a ghost town and I’ve not visited there in years.”

This small town in Idaho County, Idaho, began as St. Peter.  The 1903 HISTORY OF NORTH IDAHO states “July,1884, the town site of Keuterville was preempted by Anton Hendricks, and the patent secured in 1889.  The first store was erected by Mr. Henry Kuether in 1888...The post office was established in 1888…(in the early 1880s) a considerable immigration of German farmers flowed in.”

Like Mr. Kuther many of those farmers came to central Idaho from Illinois to take up farm land when the Nez Perce Indians were removed to the reservation.  The post office apparently was located in Mr. Kuther’s store as he was appointed the post master in 1888.  Another man by the name of Henry Fisher may have been the first postmaster but Henry Kuther was the first mail carrier (sources disagree).

A petition was sent by Henry to Washington, D.C., in 1888 requesting the town’s name change from St. Peter to Kutherville, but it apparently was misread as the Post Office Department granted the change to KEUTERVILLE and not Kutherville.

At any rate, the town survives to this day with only a couple of businesses, a Catholic Church, a cemetery, and a few residents.  It is listed now as a ”ghost town” but is very popular during hunting season.  It is off the main highway from Lewiston to Boise but worth the side trip (St. Gertrude’s museum is on the way too).

In 1985, the descendants of Henry Kuther, and his wife Katherine Herboth, gathered at Keuterville for a large family reunion which was organized by Shelley Kuther.   Many of Henry and Katherine’s descendants still reside in the area.  In researching my Kuther family, I must check all spellings:  KUTHER, KEUTHER, and KUETHER.