OCTOBER WORKSHOP
presented by Eastern Washington Genealogical Society
“A little bit of everything, for everybody”

DO HOPE TO SEE YOU THERE!!

By attending this EWGS workshop you consent to the use of your photograph, voice, likeness, and image in the broadcasts of this event and in subsequent productions drawn from video or audio recordings of this event
Posted by Donna at 1:35 PM No comments:

I was lucky as I got to see the Genealogy Roadshow twice last night, our cable company has 3 PBS stations and one station had the Genealogy Roadshow at 8 and one at 9. Several months ago I signed up with PBS to do some surveys on shows they air, and they had a first survey that asked what types of shows I liked and watched, so about a week or so ago PBS sent a short survey asking if I would be interested in a survey after the first Genealogy Roadshow, I said yes, then they asked if I was interested in a survey after each of the four shows, and again I said yes, so last night after the show I went to the URL PBS sent me and took that survey.

The survey had 33 questions , some with multiple questions, so I will just do a few here.

I did skip a few that were mainly repeats of other questions, just worded differently
Posted by Charles at 3:56 PM No comments: 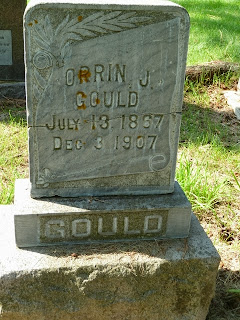 Orrin J. Gould lies resting in Fairmount Cemetery. His death certificate says he died on 6 Dec 1907 not 3 Dec. He was 38 years old; had been born in New York; was the son of James Gould also born in New York; and he was a printer by occupation; his address was Five Mile Prairie in Spokane. He died of pernicious anemia ("diagnosis of former attendant").

Beyond this, Orrin is a mystery. I did not find anything about him in the 1880 or 1900 U.S. Federal Censuses. Or any documentation in our Washington State Digital Archives beyond his death certificate.

How many "unknown" rest in our area cemeteries? They may have a name and dates, they may have a death certificate, but the rest of their story is unknown. I think that is too bad. Surely Orrin J. (likely James after his father) Gould must have some family somewhere who is trying to find and document his final resting place? Who paid for the lovely tombstone??

EWGS stands ready to assist any family member claiming Orrin James Gould in their family tree.
Posted by Donna at 10:17 AM No comments:

Walking with Ancestors 2013 The Iron Horse Era in Spokane

This is the group photo. 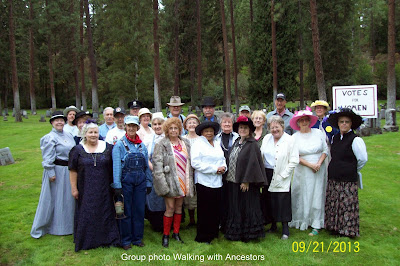 These are several of the Actors 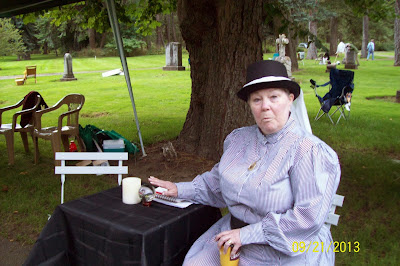 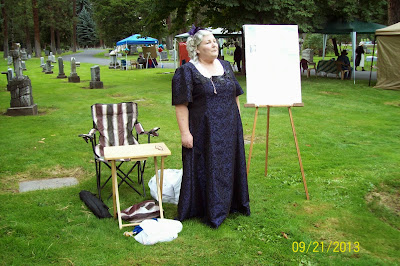 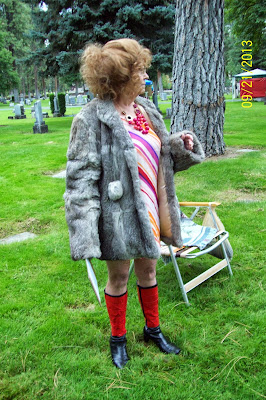 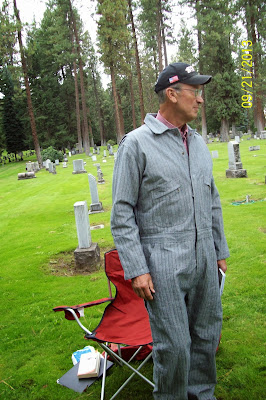 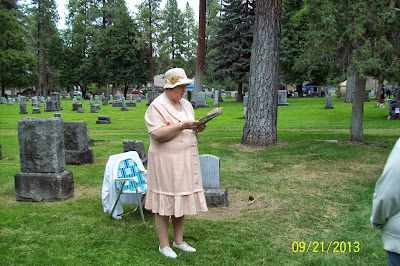 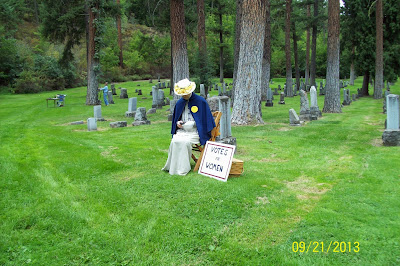 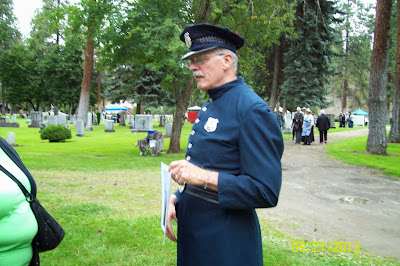 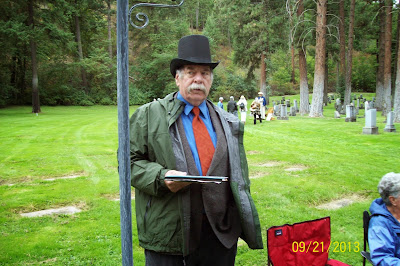 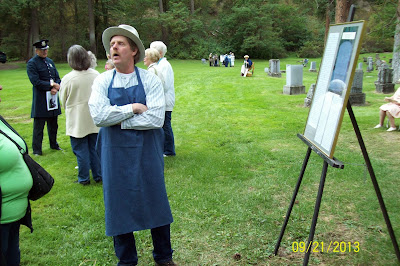 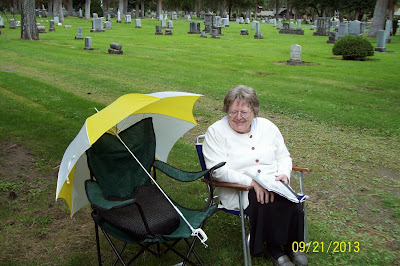 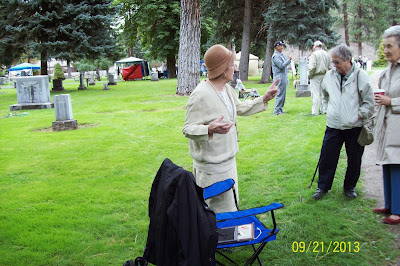 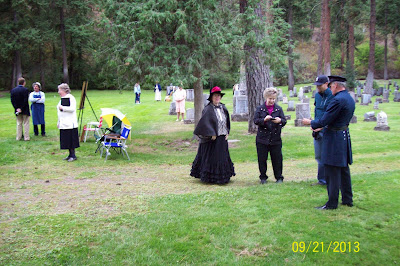 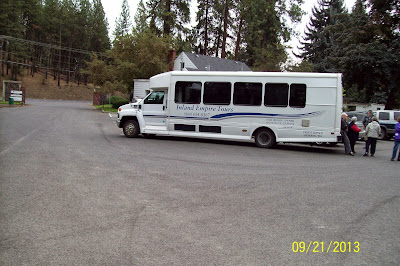 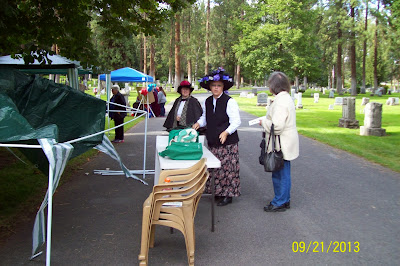 Special Thanks to Barbara Brazington (center) our hard working everything 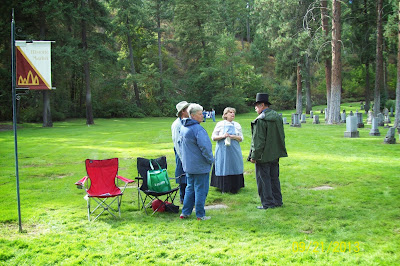 Posted by Charles at 8:14 PM No comments:

Know What Happened On 12 September 1927 In Spokane? On Monday, September 12, 1927, Charles A. Lindbergh landed his Spirit of St. Louis in Spokane at Parkwater Aviation Field (soon to become Felts Field) during his nationwide tour of 75 cities following his epic trans-Atlantic flight on May 21st. Dignitaries from the city, state and the military, as well as hundreds of ordinary admirers greeted him at the airport. Only the grandstand at the fairgrounds was large enough to accommodate the larger crowds waiting to honor him and hear his speech. The day's festivities culminated in a banquet at the Davenport Hotel.

According to a bit on www.historylink.org, The Free Online Encyclopedia of Washington State History, "before landing on that rainy afternoon, Lindbergh swooped so low over the old Interstate Fairgrounds (later Playfair Race Track) to greet the 20,000 awaiting his arrival that one could actually read Spirit of St. Louis on the aluminum cowling. When the little plane came into view, the welcoming committee at the field had to clear the runway of the surging crowd so that Lindbergh could land."

Read the entire 2-page essay at HistoryLink.org.  I find these tidbits from Spokane's history most fascinating, don't you?
Posted by Donna at 3:12 PM No comments:

EWGS Does KSPS On September 8th 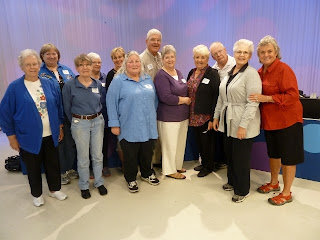 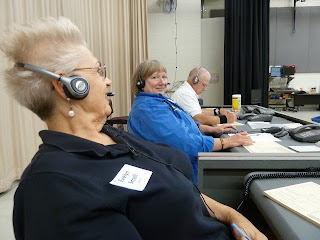 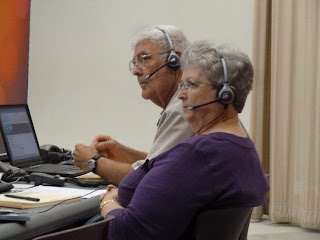 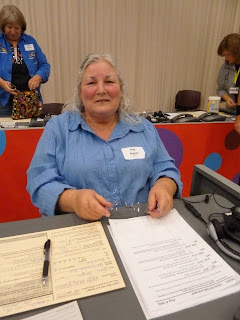 As they say, a good time was had by all. Twelve volunteers from EWGS manned the phones at the KSPS public TV station taking pledge calls on Sunday afternoon, September 8th. We made a "ton" of money for the station....... Pat A.'s first call was a $1000 pledge!! That's her in the lower pix.

Besides the good we did for public television, we all had a good visiting time. I learned that each of us had a Last Summer's Genealogy Gem to share:

Leah is learning to use her new MAC and entering her information into Ancestry.com; she and a distant cousin have donated all the back issues of Big Smoke, the publication of the Pend Oreille County Historical Society (in Newport) to EWGS. What a wealth of eastern Washington history!

Evelyn finally connected her Small family in the U.S. to the Schmahl family in Germany in the 1600s.

Janet was telling me that her g-grandfather was a Civil War veteran and is buried in Greenwood Cemetery but is not on any list! EWGS will fix that for sure.

BJ has been working on her Gormley and Renick Irish lines but she took her 12yo granddaughter to the AHSGR convention in Fort Collins, Colorado, and says the girl is hooked on genealogy. Yahoo!

Harold and Florence explained that he found that a great uncle had been in the insane asylum and was buried on the grounds and she explained that they just buried her brother in our new Veteran's Cemetery here.

Lois found a wonderful story about her g-grandfather.... apparently he was stuck twice on the same day by two different cars in Chicago in the 1930s and died soon thereafter. She's also traced her maiden name line back to the Second Boat, the Mary and John.

Maggie found that a distant cousin posted family pictures on Facebook that the family had never seen but the pix proved that her granddaughter's husband goes go back to this family for they all were very tall fellows... her grandson-in-law is 6'7".

Pat found out, via the company 23 & Me, that she is 2.8% Neanderthal which "proves my people were here way, way back!"

Janine admitted having done no genealogy this summer but did travel to Montana three times and enjoyed the beauty of Glacier National Park.

Mike sent off for his father's World War II file knowing that many of these records were destroyed by fire in the 1970s. But Mike was lucky; he got his dad's DD214, which showed his service timeline, and a list of the medals he was awarded.

The main point of sharing all of this with you is this: Doing service projects like this are times when EWGS members can network, can share stories, can learn about new resources and can just have a good time with like-minded folks. I hope YOU will consider joining our KSPS crew next opportunity. 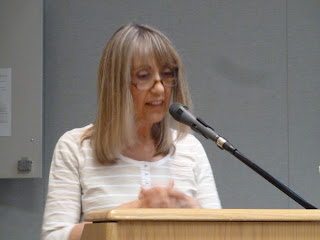 EWGS member, Susan Beamer, came up from Pullman to give us a great program last Saturday. Her topic was Researching In Local Government Records and she is very qualified to present this topic. She worked at the Washington State Archives, Eastern Branch, for years before becoming the archivist for Schweitzer Engineering in Pullman. (Bet you did not realize that big businesses need to keep historical records too.)

Giving examples of her own family as found in the archives, Susan went through the major county offices and explored the records created and/or kept in those offices.

For instance, the Auditor's office keeps "whatever won't fit elsewhere" and could be vital records, livestock brands, licenses (as in business licenses or dog licenses), land plats, voting records and more. The Clerk's office is more likely to keep civil, criminal and probate court records. The Assessor or Treasurer's office might keep personal and real property records (for tax purposes). Other governmental records kept might include school records, city/town records, sheriff's records, and cemetery records.

While these examples were from the eastern Washington area, Susan assured us that parallel records are kept in every county across the United States.

Where to find out about these records? Susan gave several sources and books but (taking editorial liberty) I recommend doing a Google search for "XX county probate records." Or marriage records, etc.

We thank Susan for sharing her time, talent and knowledge with EWGS.
Posted by Donna at 9:33 AM No comments:

Labor Day Special from Genealogy Tip of the Day 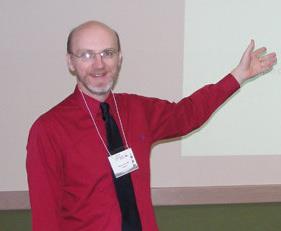 The second special is a $4 Download Special of three of his most popular webinars: Seeing Patterns; Charts, Charts, and More Charts; and Creating Research Plans.This special is available here only.

You may remember that Michael was our speaker at the October 2006 workshop. If you haven't had an opportunity to hear him live, his webinars are the next best thing! Also, I (Miriam) have done a review of Casefile Clues here, if you are interested in his newsletter.

The list of other webinars for sale (not included with the $4 Download Specials) is available here. Scroll down to the bottom of that post to see the link for ordering the Casefile Clues newsletter. 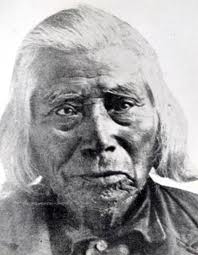 Quoting from Jim Kershner's story in the Sunday, September 1st, Spokesman:  "Chief Spokane Garry (ca 1811-1892), the famed leader of the Spokane Indians, is one of the most extensively researched figures in Spokane's history. Yet history has long been silent about his original tribal name. Until now.

Two local, amateur historians have found definitive, written proof that Chief Spokane Garry's Salish language name was Slough-Keetcha."  And the article showed a facsimile of the written proof of his name and explain how the discovery was made. This was a good-read article and further proof that our Spokesman is worthy of our subscription.

Is this information relevant to EWGS? Certainly for we strive to discover our ancestors real, full and proper names. And we're quite maddened with mention of Mrs. Andrew Smith. We know names are vitally important and we, too, seek after them.

Here's a name-funny I found in the 1860 census for the Western District of Washington County, Virginia (out in the westward-reaching toe of Virginia). On this census I found Leonidas LOVE, age 58, born Virginia, and his wife Freelove, age 56, born Virginia. Made me laugh:  Mrs. Freelove LOVE. And you?