It was back in 1935 (January 31st to be precise) that nine ladies met around a large table on the mezzanine of the Davenport Hotel to form the Eastern Washington Genealogical Society. Our wonderful society will turn 80 next year in 2015. 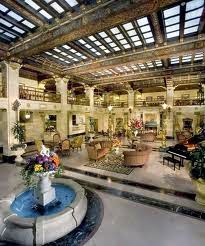 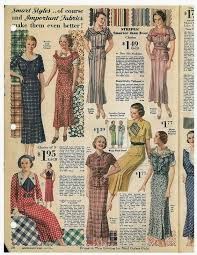 Not sure what those nine ladies wore but this is a good 1935 guess. Ditto for the Davenport.

At that organizational meeting, offices were established and officers elected..... certainly a gentleman for president! But Samuel Weaver, while he consented to be elected never really "was" president and never served, was elected for a 2-year term. Other position were filled by the ladies..... all listed as "Mrs. X.X. xxxxx" and not by their names. Initial dues were established at fifty cents.

With this organizational meeting in 1935, EWGS became the final form of three years of plans. The goals of the new society were: "to create interest in genealogical and historical research; to assist members in searching for an determining their own ancestral lines; to collect genealogical and historical materials; and to assist the Spokane Public Library in building up the Genealogy Section by securing books, magazines and manuscripts."

EWGS wants to plan their June program to be a celebration of our 80 years. We have already secured Garrin Hertel of Nostalgia magazine to give us a "What Was Spokane Like in 1935?" presentation. We need a committee and a committee chair. Won't YOU step up to help? Call Donna Phillips at 509-624-4118 or Donna243@gmail.com.
Posted by Donna at 10:55 AM 1 comment:

This is an annual free event (date for next year is October 17th), with a free lunch, and many great classes from which to choose.

About a dozen EWGS members were there; it was a good day and plan now to attend next year. 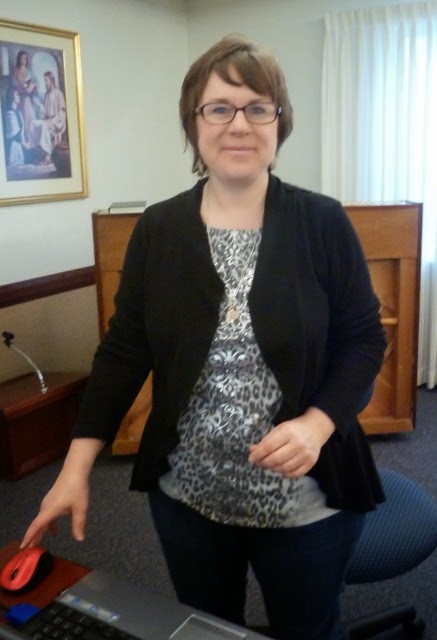 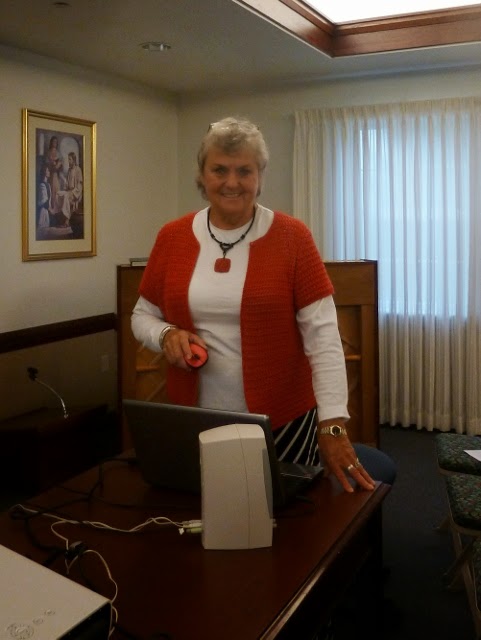 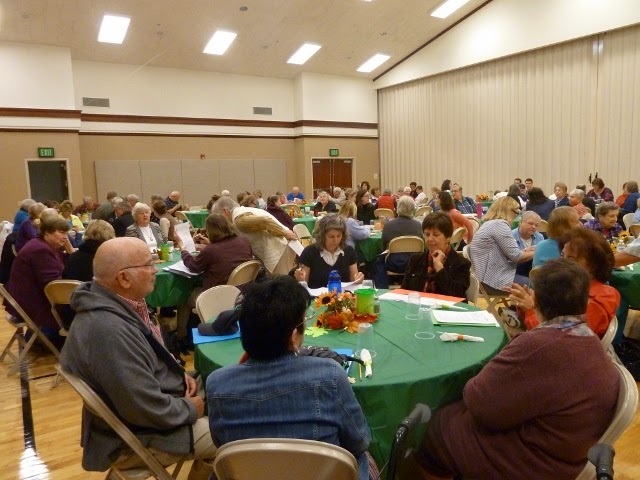 Family History director, Connie Godak, was the emcee and is the moving force behind the Fair. 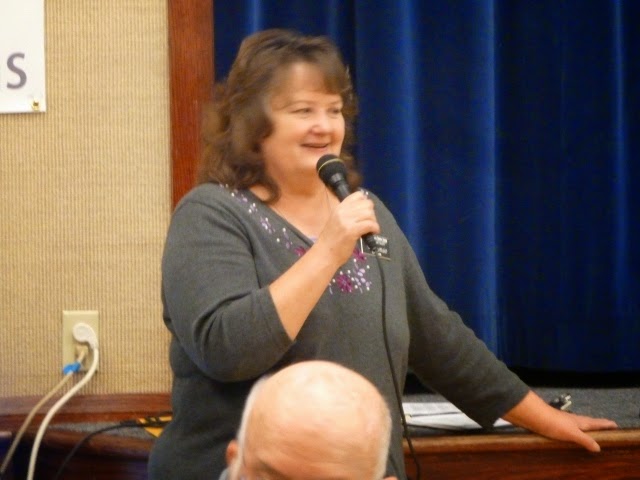 Tony & Janette Birch explain how we can add our own surnames to the EWGS website.

Tony and Janette Birch have been supporters and helpers for EWGS for several years and (bless them!) they are still willing to participate. And they continue to be the official greeters (complete with purple badges) at our meetings.

Tony and Janette used to collect from EWGS members information on what surnames, along with dates and locations, that they were researching. They would then enter that data into our www.EWGSI.org website.

Now we have a new development! YOU can directly add YOUR OWN surname information to our website. Janette sent the instructions for doing so:

When dealing with those pesky brick walls you need every trick in the book to take down that wall brick by brick.  One handy trick is to go to www.EWGSI.org and click on Members Only, put in  your Login Name and Password then click on Surname Research to look for family surnames.  If you haven't yet put in your family surnames then please share and put them in.  Directions are easy to follow.  Others will also be looking for their family surnames and may come across a family name that they have in common with you and can contact you with information.  If you're not a member then go to www.EWGSI.org and click on Join Us to become a member and be able to access all our website information, including over 600 surnames.  One of them may be yours.

Thanks, Tony and Janette!
Posted by Donna at 11:12 AM No comments: 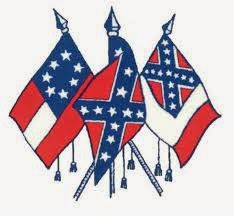 Did you realize that during the Civil War, 1861-1865, the Confederacy adopted three different flags?

This is a link to the website of the Museum of the Confederacy in Richmond, Virginia, and you can learn all about the different flags there.  http://www.moc.org/collections-archives/flags-confederacy  I do know that the one we see most often, and think it represents the Confederacy, is an incorrect assumption on our part. That one, the one we most often think of, was only the battle flag.

Dale Ryan, a member of the local SAR group, will be one part of our November 1st program. He'll be bringing examples of some different flags and teaching us about them.

A speaker from Honor Flight will be there, too, along with EWGS member Patty Harrison to explain our EWGS Civil War Ancestors' Units project.

Meeting starts at 12:30 with Coffee, Cookies & Conversation at the downtown Spokane Public Library. All interested genealogists are invited!
Posted by Donna at 12:00 PM No comments:

Saturday, October 4th, was a great day for EWGS. Steven Morrsion came from Olympia (with his lovely wife Gloria) to teach us the fundamentals of doing Irish Research both from home and if you go to Ireland.......... either to Dublin or Belfast. One very basic thing I learned was the meaning of the Irish flag. The green stands for the Catholics; the orange symbolizes the Protestants, and the white center means that there should be peace between them. Northern Ireland recognizes and uses the British Union Jack. 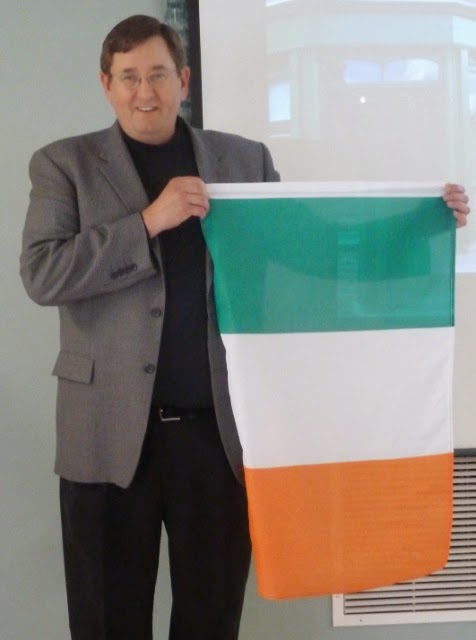 Steven also encouraged us by explaining that in the four provinces of Ireland, a bigger percentage of the parish records did survive the 1922 fire at Four Courts than you might have realized: In Ulster, 63% survived; in Connaught, 50% survived; and 39% each survived in Leinster and Muenster. That was encouraging news. "But make no mistake," Steven counselled. "Doing Irish research is hard."

During the lunch break, Dani Lee McGowan and Doug Floyd announced the winners of the 2014 EWGS Writing Contest and presented certificates and checks to the winners: 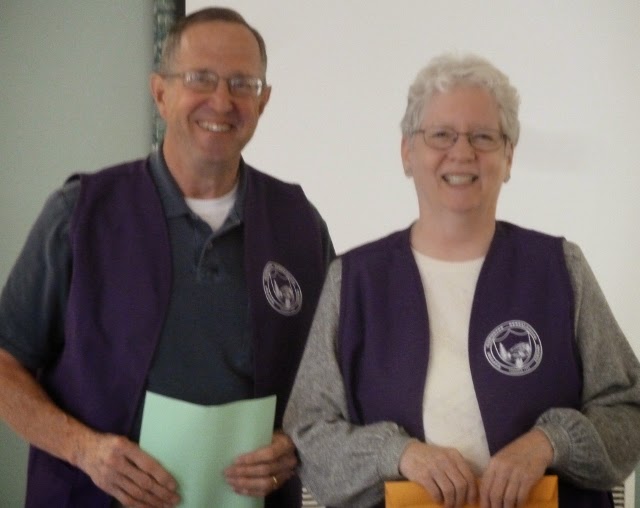 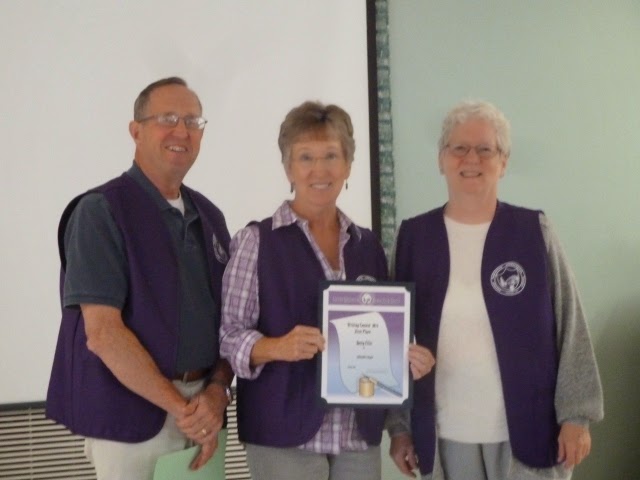 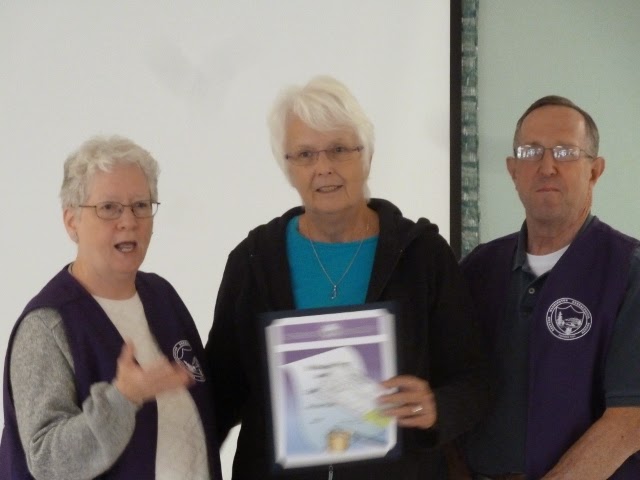 Third place winner, Patricia Bayonne-Johnson, was unable to attend to claim her prize in person.

Doug announced the EWGS Writing Contest theme for 2015. In honor of the 80th anniversary of EWGS, the contest theme will be "My Family In 1935."  Wherever they were, tell us about them and their lives during that year. Contest deadline is 30 May 2015.