Did you see the article in The Spokesman-Review that included this picture? It was a story from
Medicine Rocks State Park in Montana and was the sad story of how they've found where a lonesome sheep herder named Herbert Dalton in 1904 carved a likeness of his lost love into a sandstone bluff. He was from Ireland and, according to the article, "she wouldn't come West." The carved portrait shows a profile with a "sweeping turn-of-the-century bun and facing her, a bird in flight offering a delicately drawn flower."  So sad.
I did some looking and did find a Herbert Dalton, age 33, single, born April 1867 in Ireland, immigrated in 1872 and was naturalized,  living as a farm laborer/sheep herder in Flatwillow District, Fergus County, Montana, on June 21, 1900 (U.S. 1900 census). I did not find him in the 1910 or 1920 census. Nor could I find him in any online Montana death databases.
Is there a Dalton family somewhere looking for a lost Herbert Dalton?? Do you look for these sorts of things and do they motivate you to go find "the rest of the story?"

Did you know that there is a thriving historical society in the Clayton-Deer Park area? EWGS member Sharon Clark is the editor of Mortarboard the society's newsletter and the issue I'm holding is #48 so it's been around for a while. Their mission statement reads:  "The Clayton/Deer Park Historical Society is a group of individuals dedicated to the preservation of the history of the area just north of Spokane Washington. The Society collects oral, literary and pictorial history to publish and otherwise make accessible to the public. The C/DP HS meets on the second Saturday of each month at 9:00am at the Clayton Drive-In, located just off Hwy 395 and Railroad Ave."

FamilySearch continues neck-and-neck with Ancestry to see who can give us the most needful and wonderful data AND to teach us how to use that information when we find it. The FamilySeach newsletter contained this great snippet:

5 Minute Genealogy: Find a Record in 5 Minutes
The 5 Minute Genealogy series is an on-going set of videos that covers a wide variety of topics in a simple and easy-to-follow format. They are available free of charge to the public through the FamilySearch website. View this video by clicking here!

Our EWGS team helping with the 1940 census indexing project has indexed over 60,000 records..... and closer to 65,000 by the time you read this. For a relatively small group (35) that is phenomenal, don't you think?  I'm betting FamilySearch will have the 1940 census up and available to us before Ancestry does. Several states are indexing-completed but not arbitrated and posted yet...... but at least five states are 100% ready:  Nevada, Maine, Washington DC and Delaware.
Posted by Donna at 6:28 AM No comments: 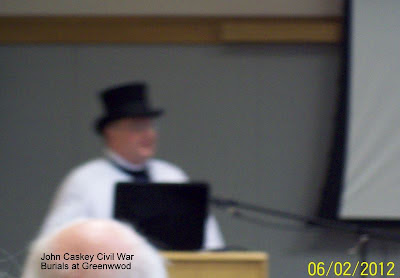 This is a lousy picture of John Caskey the historian from Greenwood Memorial Terrace Cemetery. His topic was on why so many Civil War Veterans are buried in Greenwood Cemetery, but he actually covered why so many are buried in the Spokane area. Spokane did not even exist during the Civil War, but the main reason was land. In 1862 the homestead act was passed giving land to anyone that could live there for five years, and later they changed that to three years for veterans. Many never stayed the five years, but after they learned to dry land farm near Ritzville many homesteaders stayed and prospered. Spokane also had FOUR transcontinental railroads, not many cities in all of USA had four transcontinental railroads, and the railroads lowered the rate for immigrants to attract settlers. The one fact I thought was interesting was that more Civil War Veterans are buried at Greenwood Cemetery than at the GAR cemetery on the coast specifically for Civil War Veterans
Posted by Charles at 9:36 PM No comments:

Labels: Greenwood Cemetery, What You Missed

Fold3 Opening War of 1812 Images for Free During June

I received the following message from Matthew Deighton of Ancestry/Fold3:


... Fold3 will be opening up all of their War of 1812 records to the public for free during June. This is in commemoration of the 200th anniversary of the commencement of the war. The collection consists of more than 400,000 images including 233,000 images from the War of 1812 Pension Files never before available online. The following databases provided for free included:

The Pension files that are included are only a small percentage of the entire collection that will eventually be available online. For more information on the War of 1812 Pension and Bounty Land Warrant Application Files, visit http://go.fold3.com/1812pensions/.

Posted by Miriam Robbins at 11:07 AM No comments:

I received the following message from Dianne Boyd, webmanager for EWGS:


Welcome to Summer!  The Summer issue of the Digital Digest is now ready.  Just go to http://www.ewgsi.org - sign in, go to your "Members Only" and select the "Digital Digest".   This issue is packed with interesting and fun tidbits of genealogy news.
A special thanks to Gerry Gosche for her dedicated time as our proofreader.
While you are on your website, don't forget to  look at the EVENTS section. The details of the Fall Workshop are now online.  Register today as September isn't far away.
Remember.... you can now add your own surname(s) to your profile.   Select the "Surname Research" category, select "Add Surname" and follow the screens.  It's really easy!!
Hope everyone enjoys the Summer Digest.
Warm Summer Thoughts to Everyone...


There are some great articles and tips...and even a book review by yours truly!

Enjoy!
Posted by Miriam Robbins at 11:01 AM No comments: