This wonderful bit comes from the Family Tree Magazine blog for 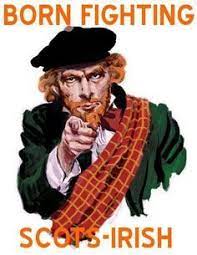 A question posted to the above blog: "A 1755 Virginia militia Muster roll has "Scotch," "Scottish," "Irish," and "English" as places of origin. Is "Scotch" always short for Scotch-Irish or might Scotch and Scottish be used interchangeably?"
Answer: Although the Oxford English Dictionary states that "Scotch-Irish" was first used in 1744, nearly the time of your militia roll, earlier examples abound. The first known colonial reference appears in Maryland in 1689. From 1717 until the American Revolution, more than a quarter-million "Scotch-Irish" immigrated to North America...but keep in mind they came from Ireland, not Scotland.
They descended from about 200,000 Scottish Lowland Presbyterians who relocated to Ulster, in northern Ireland, with the encouragement of the Protestant British government. Britain hopes the Scottish "plantations" would tighten its grip on mostly Catholic Ireland.
When they migrated again across the Atlantic, these ethnic Scots from Ulster were typically referred to as Irish, given their most recent home for as much as a century. It was only after large-scale Irish migration began that these Protestants widely adopted the "Scotch" (or "Scots") qualifier, to distinguish themselves from the new Catholic arrivals. Eventually, nearly two million "Scotch-Irish" left Ulster for North America.
The term Scotch-Irish, though common in the U.S., is all but unknown in England, Scotland and Ireland. Today, the people of Scotland prefer the terms Scottish and Scots, using Scotch exclusively to refer to whiskey. We can only guess what the recorders of your 1755 muster roll might have been thinking, but it's certainly possibly that both Scotch and Irish referred to what we not call "Scotch-Irish." Indeed, given the era and these immigrants' recent history, Irish was probably the preferred term; only a few Irish from outside Ulster had arrived by 1755.