History of the Railroad Caboose 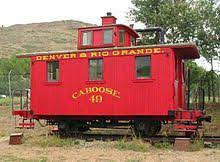 Last September I visited EWGS past president and long-time friend, Dale Hastin, who now lives in Denver, Colorado. We spent a delightful day at the Colorado Railroad Museum........... I was in this very caboose!

Dale drove us south to visit the Colorado Railroad Museum in Golden, CO. This museum has over 100 railroad cars of various types, mostly donated by a collector in Arizona who began collected narrow-gage cars when the railroads switched to wider gage.  I took a tour of several cabooses and learned the fascinating history of the caboose from Phil Smith, a long-time volunteer. And he’d worked on the railroad in his past so he was very knowledgeable. First thing he taught us was never to step ON the rails but always between the rails. Also, who is in charge of the trail, the engineer or conductor? The latter.

Why are there no cabooses on trains now? Technology. The rear-end car to watch the rails behind and the cars in front where men perched in the cupola of the caboose was replaced in the 1970s by FRED. This was a rear-end device that computer monitors everything and is a better safety device. This replaced two brakeman and even the conductor, who used to ride in the caboose, now rides up with the engineer.

Cabooses in days of yore were twenty or less cars so the caboose fellows had a good view of all the cars. (Nowadays they can be up to 200 cars!)

The earliest cabooses were empty box cars at the end of the train. This car contained a desk (for the conductor) and the many and various tools for the brakemen. There might be bunks (for resting between runs), a stove for heat and cooking. Initially a hole in the caboose roof was cut and the brakeman stood on boxes to see the train. In 1860 a cupola was introduced to better be able to watch the train. Each car carried two workers: a flagman and a brakeman.

Before air brakes, it was the job of the brakeman and flagman to run back and forth on the top of the train, hopping from car to car, hand setting the brake on each car, day or night, rain or shine. This was a dangerous job indeed. A federal law was passed by 1900 that all trains would have air brakes. Of course they squawked because it was expensive and cheaper to hire new men to replace those killed or maimed. Why would any man want to be a brakeman? It was the beginning career step to be a conductor. And remember that the only means of communication between the engine and caboose was voice, hand signals or lanterns.

The age of a particular caboose can be best guessed by the placement of the cupola….. front, end or middle. If you wish to know more about cabooses and their history, just do a Google search.

Phil Smith ended our tour with these words:  “As in everything, technology and computers have replaced men over time and a better and safer job is done. Steam engines and cabooses are now history,” he added nostalgically.