Referring to Jim Kershner’s bit on July 14th, and as an enthusiastic genealogist, I had to know the rest of the story about young Walter Maydahl who was sentenced to 24 hours in jail for “driving the car 47 miles an hour….with a young woman on his lap.”  Walter was 17 on that July day, the son of Sivert Maydahl (1867-1927) who had immigrated from Norway and was a “motorman on the street railway” according to the 1910 census for Spokane.  On the 1920 census, Walter was single, living at home, and was a “night clerk in telegraph office.” Albin Walter Maydahl married Joy Acoam in 1922 in Vancouver, Washington; was she the lady on his lap?  In the 1930 census, Walter and Joy were living in Wallace (with son Richard) where Walter was a “railroad car inspector.” By 1940, they were living in Salt Lake City (with two more children, James and Maria) where Walter was a “car foreman.” Joy died at age 89 in King County. Walter died in September 1964, according to the Railroad Retirement Pension Index. Have you enjoyed reading what Paul Harvey called “the rest of the story?” Hope so.

Sievert Maydahl rests in Greenwood Memorial Terrace in Spokane. There was no Find-A-Grave listing for either Joy or Walter. 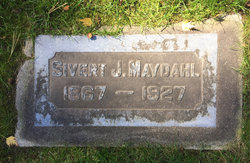