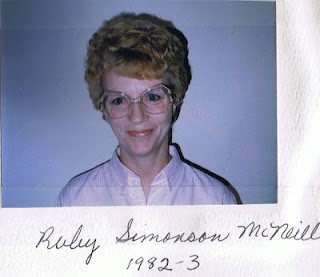 Ruby Simonson McNeill was EWGS President in 1982 and 1983 and was born at Colville, Washington to William Russell Simonson and Doris Mary Fay, both natives of Washington state. Ruby graduated from Ephrata High School and worked for Pacific Northwest Bell Telephone Company. She also lived and worked in Washington D.C.,for three years and while there met Duane Leslie McNeill son of Robert E. and Leota Junella (Schuman) McNeil and they married in Bakersfield, California, March 8, 1959. They have two sons, Dane Ladd and Rick Dean. In 1982 when Ruby became EWGS President she was known for her sharp wit and delightful sense of humor as well as her capable leadership. Dorothy Meyers Braithwait became editor of the Bulletin. EWGS also decided to designate June as a time to honor its leaders. A June luncheon was held and this became an annual event. The annual fall workshop was again held at Garry Junior High School with Donna Phillips as chairman. In the fall of 1982 it was decided to expand the hours of the library helpers to include the evening hours as a service to the working members. In 1983 the annual fall workshop was moved to Spokane Falls Community College to accommodate the growing numbers of people attending. During 1983 an offer by Kay and Kirsten Straight would bring EWGS a Corona Computer and Comrex printer. It arrived February 4, 1984.
Ruby has been a prolific author of books that benefit other genealogists, our Spokane Library lists 6 books with Ruby as author; Lewis County Washington Death Records 1891-1906, 1900 Federal Census Columbia County and Mortality Schedules 1860 and 1870 Walla Walla Washington 1880 Columbia County, Quaker Records Monthly Meetings Berks County Pennsylvania, Lewis County Washington Newspaper Extracts, Columbia County Newspaper Extracts and 1889 Columbia County Census. Ruby also came along when Surname Booklets were very popular, and she was the author of Rogers Research, Cain Connections, McNeill Memoranda, Quaker Queries, Freeman Footnotes, Simonson Misc., Barrett Branches, Talbot Tree and Wiley World. Good thing I did not subscribe to any of these booklets, almost every surname booklet I subscribed to folded quickly after I subscribed. Ruby is still an active EWGS member and always there with a suggestion on how to better research your ancestors or to use the latest technology. Ruby is one of the few EWGS members to have her own web page;
Posted by Charles at 9:03 AM