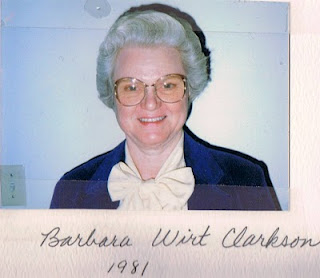 Barbara Wirt Clarkson was EWGS President in 1981. Barbara was born in Redmond Oregon in 1923 to Harry M. Wirt and Jeannette Morrison. Although the Morrisons were from Canada, they were originally from Sweden. Harry Wirt's father George Wirt was from Germany. Barbara graduated from Central Valley High School and the University of Washington with a B.A. in Accounting. On June 21, 1947 Barbara married Ralph Earnest Clarkson, he was born in Greenacres, Washington in 1921 to Earnest W. & Blanche (Patterson) Clarkson. Earnest was born in Nebraska and his father Abner was from Illinois. Ralph joined Brown-Johnston Electrical Contractors in 1953 and later purchased the company. He retired in 1976 and died June 25, 1986. He served in the European Theater during WWII, and was a member of the Chapter 45, Disabled American Veterans, the El Katif Shrine, Orchard Masonic Lodge 200 and the Athletic Round Table. Barbara contributed bible records for the Patterson and Clarkson families and did a lot of Swedish research on her grandfather Peter Larson.
In 1981 EWGS dues were raised to $7.00. A beginner's genealogy class was begun at 10:00 am on the first Saturday of the month, Julie Hendricks and Donna Phillips were instructors the first year. The day for the Library Helpers was changed from Wednesday to Thursday 10 A.M. to 3 P.M. A locality file was introduced so members could contact others researching the same areas. The annual workshop was held at Garry Junior High School with Donna Phillips as Chairman. 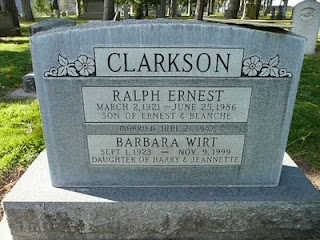 I remember Barbara at several EWGS meetings, and she was always interested in genealogy and in shy newcomers (like me).
Posted by Charles at 9:21 AM

I joined EWGS when Barbara was the President and she became a wonderful and close friend. I always would ask her opinions when I had problems as president. She was the neatest lady and I cannot imagine anyone not loving her. She died of ALS and it was so hard to watch.
We need more people like her in EWGS.
Bette Topp