One reason most genealogical societies have been formed and flourished was because of collaboration. Genealogists getting together to help each other research better, and for educational opportunities. EWGS has also hosted Washington State Genealogical Society Conferences to collaborate with other societies and people from all over the northwest, but the longest and most fruitful collaboration for EWGS has been with the Spokane Public Library. Soon after EWGS was founded the members started contributing books and microfilms to the Spokane Public Library, and the library found a place for EWGS to meet. EWGS provided gene helpers so people coming to the library could get help from a genealogist. The Friends of the Library group was formed mostly by EWGS members, and it continues on today providing a lot of help for the library although I don't think many EWGS members are also members of the Friends of the Library anymore.

Has the collaboration between EWGS and the Spokane Public Library worked? Yes, both groups have benefited, EWGS has not had to rent a building and pay utilities, etc., and the library has a large genealogical collection and volunteer helpers that free up the librarians for other work. 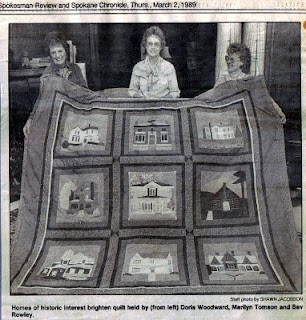 This picture is from the newspaper and shows collaboration between EWGS and the library, to make and sell a centennial quilt for an EWGS fundraiser. Tickets were a dollar and the winner was picked on November 11, 1989, the date of the State of Washington's 100th birthday. The Centennial quilt had pictures of nine houses built about the time the State of Washington became a state. All the houses are in Washington.

Written for the Second Edition of the Carnival of Genealogical Societies: Collaboration.
Posted by Charles at 9:36 PM