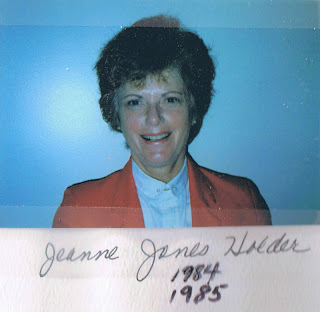 Jeanne Jones Holder was EWGS President 1984 and 1985 (EWGS was 50 in 1985). Jeanne was born in Grandview Heights, Columbus, Ohio to Ira Stanton and Pleasant Alleyne (Higgs) Jones. She graduated from Grandview Heights High School, a B.S. in Education from Ohio State University and a Masters in Education from the University of Idaho. She was a teacher. In 1955 she met and married Robert Holder and they have two sons Mike and Bill and daughter Ann. Jeanne's hobbies are genealogy, gardening, knitting, traveling and her family. In a March 2, 1989 article in our newspaper by Beverly Vorpahl (another EWGS member), she wrote "Jeanne Holder is such an optimist that she believes almost anything can be done. A complete beginner at quilting, she nonetheless took on a tremendous quilting challenge. Holder had just joined the Washington State Quilters Association in order to learn quilting. She was also president of Eastern Washington genealogical Society and was constantly thinking of fund raising ideas for the group. The organization is concerned about personal history and also wanted to be part of the state's centennial celebration (1889-1989). One day, she came upon an idea that would tie all the elements together - a quilt which would depict some of the Spokane area's history. Not only would the quilt raise money for the genealogists, but it would also commemorate the state's history." I wrote about this quilt in the second Carnival of Genealogical Societies and it includes a picture of the quilt.
In 1984 the primary project for EWGS was learning to use the computer donated the year before, many hours were donated to enter membership lists, the holdings, the I.D. Cards, etc. into the computer. The Presidents luncheon was held in June of 1984 in the Isabella Room of the Davenport Hotel. EWGS also had a summer seminar, Ronald Bremer was the all day speaker at Spokane Falls Community College. Cost $5.00. In August 1984 EWGS offered to hold the 1985 Washington State Genealogical conference, and so May 31, June 1 and 2, 1985, at Whitworth College, Spokane, Washington the WSGS conference was held. The October workshop was again at Spokane Falls Community College, and due to its chairman Donna Phillips it was a success. In the Fall of 1984 a German interest group was started and later a Scandinavian interest group began meeting. In 1985 EWGS had almost 400 members and about 100 at each monthly meeting. This was the 50th year for EWGS and with the WSGS conference a great celebration.
I joined EWGS a few years later, and worked on a project with Jeanne Holder to index and then film records for the First Presbyterian Church, and she was always interested in how the project was going and making sure all the people working on this project were doing a good job. Glad I was able to know and work with Jeanne.
Posted by Charles at 10:07 AM