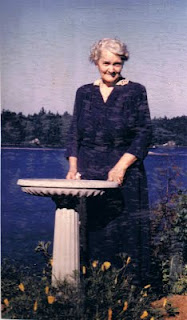 Florence married in Walla Walla, 9-30-1903 David Brown born Galena, Illinois 12-5-1865, they had three children Helen Elizabeth, Gordon Ballou, and Sylvia Naudain Brown. David was the son of Sherwood S. and Cecelia (Bouton) Brown. Sherwood ran Hazelwood Farms in Illinois, and when David and his brother George Brown came to Spokane in 1888 they formed Hazelwood Farms near the Hayford-Cheney road and the Sunset Highway. Mr. Brown was the president of the company for more than 30 years. He also founded Spokane's National Apple Show. In the early 1900s Hazelwood Farms was the second largest dairy in the country, they first innovated wrapped butter, pasteurized cream, baby formula and an extensive program to encourage sanitary dairy practices. The dairy cattle specially bred became the core of the Carnation Milk Company's world famous Holstein herd in Seattle.

Florence was also a member of the Spokane Gary Chapter of the DAR and authored the Volumes 10 and 11 of the Washington Pioneer Series the DAR did in the 1930s. After David died in December 1951 Florence moved to Milton Freewater, Oregon.

Florence was also listed in the Who's Who in Genealogy 1937 by the American Handbook of Genealogy. I read the listing and it looks to me more like a place to post queries than an honor for being a famous genealogist.
Posted by Charles at 9:48 PM

I recently came across an old milk bottle found in Spokane with the logo "Hazelwood." Interesting that the Hazelwood Dairy in Spokane was the second largest in the country. No doubt that Brown was a mover and a shaker. Thanks for the interesting article.

I am the Granddaughter of Sylvia Brown(Goodrich). I never had the opportunity to meet my Great Grandmother Florence but I am blessed to know that she was such an interesting and influential woman.

Becky, it is good to hear from you! Thank you for taking the time to comment. If you are in the area, I hope you know you are welcome to visit EWGS at any of our general meetings. See our website, <a href="http://www.ewgsi.org>www.ewgsi.org</a. for our meeting schedule (look under Events).