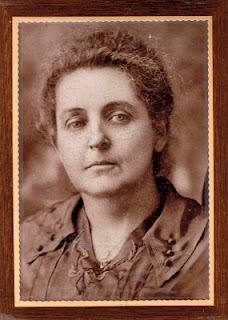 The next EWGS President was Achsah A. Maltbie Rawlings, but I think I will do this post on her mother Mary Elizabeth Dow Maltbie. Libbie was the actual founder of EWGS and while she served for five years as a Director of EWGS, she never was president of EWGS. She was the daughter of Joseph Godfrey Dow and Mary Ann Crouch. Joseph was born near Hampton, New Hampshire and moved to near Healsburg, California and that is where Libbie was born in 1868. Mary Ann Crouch came from Crawfordville, Illinois in 1848 by ox team at age 17 with her parents Mr. & Mrs. Edward Crouch. Joseph and Mary Ann married at Sonoma, in Sonoma county, California April 20, 1850. Her father Edward was killed near Kansas City Missouri during the Civil War by guerillas. Mary Ann Dow died June 9, 1927 in Spokane and is buried in Fairmunt Cemetery next to her husband Joseph Dow who died in Larene, Lincoln County, Washington and was first buried in Cannon Hill cemetery and then moved to Fairmount cemetery.

The Maltbie family has been traced back to 1450 in England, William Maltbie came to the USA in 1672 and settled in Connecticut. Noah Maltbie was in the Revolutionary War. Three more generations and James Maltbie was in the Civil War. James had three sons Appleton, Pierce and Albert. In 1886 Pierce and Albert bought $5 tickets to San Francisco on the Union Pacific Railroad then took a steamer to Portland and a train to Walla Walla Washington, then to Spokane where they joined their father and other brother and then to Douglas county about 3 miles from Waterville. In 1887 Libbie Dow married Albert Maltbie at Sprague, Lincoln County, Washington and their first child Achsah was born at Larene, in Lincoln County in 1888 and their second daughter Theodora was born in Waterville in 1890. Appleton became the county clerk, Pierce was elected Marshall, and served in the Spanish American War. Albert Maltbie died in Seattle August 12, 1927 and Mary Elizabeth Maltbie died in Dishman September 26, 1945. The following resolution was passed by the Society on Saturday October 6, 1945 after the death of Elizabeth Dow Maltbie, one of the society's founders.


Whereas, Our Heavenly Father, in his Infinite Wisdom, has removed from our midst our beloved member, the founder of this Society, Mrs. Elizabeth Dow Maltbie, be it Resolved, That this Society has suffered a great loss in the passing of Mrs Maltbie, whose keen interest in genealogical and historical research motivated her to call together on January 31, 1935, a group of persons similarly interested, resulting in the founding of this Society, ---and Resolved, That her counsel will be missed, and that her cheerfulness and perseverance under difficulties will be remembered by her fellow members, encouraging them to maintain the Society until her dream of a large and interested membership is realized, ---and Resolved, That a copy of this resolution will be sent to her daughter, Mrs. M. G. Rawlings, that she may know of the love and admiration in which the Society held Mrs. Maltbie, and that a copy be spread upon the minutes.

This is a certificate from the Council of the Institute of American Genealogy to Elizabeth Dow Maltbie. 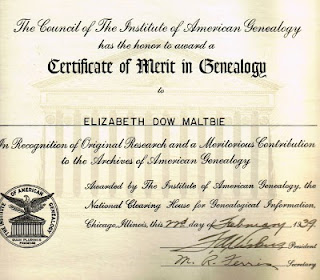