This is the ninth in the series on the Presidents of EWGS leading up to the 75th anniversary in 2010. See the previous posts on Samuel Pool Weaver, Leora Cookingham Thiel, Susan Marie West Jack, Ruth Churchill Austin, Alfred Denman, Florence Ballou Brown, Harriet Jefferson Pinkham and Mary Elizabeth Dow Maltbie.

Achsah Adele Maltbie was the eldest daughter of Albert Lyman Maltbie and Mary Elizabeth Dow (from the previous post). She was born at Larine, Lincoln County Washington October 9, 1888. Larine is now Davenport. Achsah married Milton Granger Rawlings at their home in Seattle October 9, 1911. Milton was the son of Harvey Hazelrigg Rawlings and Carrie S. Wright. Achsah was the grandaughter of James Downing Maltbie (1832-1891) and Achsah Wright (b.1843). Achsah graduated from Waterville High School in 1906 and then went to the University of Washington and got her B.A. there in 1910. Professor Edmond Meany encouraged her interest in History. In 1920 Milton and Achsah came to the Spokane Valley. They farmed in the Saltese area and in 1923 moved to Dishman. Milton died in 1970 and is buried in Pines Cemetery. She was a founder of the Spokane Valley Women's Club, the last surviving charter member. She helped her mother found the Eastern Washington Genealogical Society. She joined the Esther Reed Chapter of the DAR in 1928. Served as chapter regent in 1939-40. She was also a 77-year member of the Eastern Star. The Spokane Indian Tribe honored her in 1982 for the gift of a collection of newspaper articles on the history of the tribe. 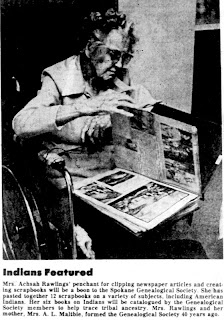 Her hobbies were collecting buttons and scrapbooking. She did five Lincoln scrapbooks, 14 Indian Scrapbooks, and pioneer scrapbooks. For the DAR she did Volume 2 of Genealogical Gleanings and Volumes 6 and 7 of the Families of Washington Pioneers. She subscribed for many years to the Boston Transcript and the Hartford Times and saved huge boxes of clippings from their query sections. Those queries were answered with sources by the genealogical researcher for those newspapers, so if you had New England ancestors your ancestor was probably listed in one of those articles. For EWGS she served as director for eight years, three years 2nd vice president, two years first vice president, and two years president (1949-1950). Achsah died January 27, 1984 and is buried in Pines Cemetery.

Comments by Carrie Lartigue: Achsah, daughter of the founder Mrs. Maltbie: "Also a charter member and staunch supporter of historic preservation - whether on paper or in old buildings. She was a working member of several organizations but never neglected her interest in genealogy. She was a Lincoln Scholar and vastly interested in Native Americans. She made up fourteen scrapbooks of clippings on articles about Indians (indexed by Carrie Lartigue). These were presented to the Spokane Tribe and are in their library in the Tribal Council Center at Wellpinit, Washington."

Editor Note: I was loaned three scrapbooks on EWGS by Lola McCreary (Thanks, Lola!) dating back to the beginnings of EWGS, and a lot of very interesting articles in it. After researching Achsah I believe she was responsible for these scrapbooks.
Posted by Charles at 9:50 PM