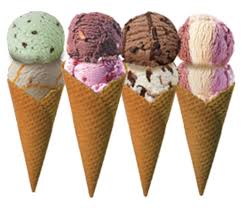 Who invented ice cream? According to "Grandma" Google:
An ice-cream-like food was first eaten in China in 618-97AD. King Tang of Shang, had 94 ice men who helped to make a dish of buffalo milk, flour and camphor. A kind of ice-cream was invented in China about 200 BC when a milk and rice mixture was frozen by packing it into snow.
Historians estimate that this recipe evolved into ice cream sometime in the 16th century. England seems to have discovered ice cream at the same time, or perhaps even earlier than the Italians. "Cream Ice," as it was called, appeared regularly at the table of Charles I during the 17th century.
What is your favorite ice cream flavor? Nearly one quarter of Americans will say "chocolate" in some form, with vanilla a close second. My favorite is a long-ago flavor offered by Baskin-Robbins, Mississippi Mud, the thickest, deepest, gooey-ist chocolate one could imagine.
According to Costco Connections, July 2020 issue: "There's no end to the bizarre and wondrous ice cream flavors in the world."  Here are some examples:
Whiskey & Prune - Australia
Foie Gras - France
Beef Tongue - Japan
Squid Ink - Japan
Crocodile Egg - Philippines
Gin & Tonic - Spain
Garlic - United States
Lobster - United States
Which one would you not never try????
Posted by Donna at 8:30 AM