Coats of Arms: Does Your Family Have One?

Our EWGS member (and former door-greeter at meetings…when we HAD meetings)….in February 2021, Tony Birch  (aka Anthony Durnford deGray Birch), compiled this bit for me to share with you. He be our local expert for sure. (This cartoon is from Google, not Tony.) 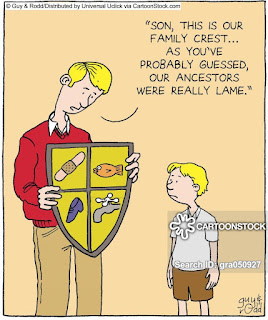 COATS OF ARMS:  As one studies their family history it is not unusual to come across a wonderful image of something (looks like a squirrel), with your family surname written upon it and perhaps a motto.  Aha!  You have just found your family coat-of-arms.

The study of these images and how they might relate to your ancestors is called Heraldry.  Unfortunately, there is really no such thing as a “family coat of arms” and it is unlikely you can claim the image as your personal coat of arms.  The rules of Heraldry state that arms are granted to an individual - almost always a man.  Rule setting bodies that make the grants are found in many countries:  England’s College of Arms  is an example.

Nonetheless, “Family Arms” evolved in the 18th Century and have widespread use.  Though not “official,” family arms are well documented in the literature and may provide useful information about your ancestors.  The image of the squirrel might be identified to a family that lived in Nutsville, PA, in 1876.

I have reference books on American Heraldry and would be pleased to help  family historians decipher a coat of arms.  I can be found at da3mj4@gmail.com.

HERALDRY:  Heraldry is the use of symbols to identify an individual.  Over time these symbols became hereditary - they were handed down according to specific rules.  Heraldry has now become the term used to encompass the science and art of these hereditary symbols.  A more precise term is “armory.”

There are many origins of heraldry, but it is mostly attributed to 12th Century Europe.  Symbols were used to identify Knights in battle.  Heralds displayed the symbols of their “masters” and the symbols also appeared on battle armor to identify the wearer.

Most heraldry experts state that heraldry is not identified to a general surname.  They make it clear that there are no arms for “Smith,” but perhaps there are for a Sir Henry Arthur Smith of Andover, England.  However, there are authoritative texts on family arms that can be quite useful to the family historian.

The rules of heraldry state that arms are granted to an individual - almost always a man.  A woman may claim her father’s arms if she had no surviving brothers or sons of brothers.

If you have arms associated with your ancestors, the main question is are they real (blessed by an official body such as the English College of Arms)?  Are these arms consistent with your family tree?

The peerage (Dukes, Marquesses, Earls, Viscounts, and Barons) always had arms as did Baronets and Knights. Esquires and Gentlemen may or may not have arms.  If the arms had supporters (animals on each side) and crowns, then clearly a peer was involved.  If you have arms associated with an ancestor, any symbol on those arms must be a part of their ancestry.  Conversely, not all ancestors of your ancestor are represented on the arms of your ancestor (provided that the arms were correct in the first place).

The language of heraldry is mostly attributed to Norman French.  To “blazon” is to describe the design of the arms.  The “coat of arms” is made up of the crest, wreath, mantling, helmet, supporters, shield, compartment, and motto.  Each of these parts can tell you something about the owner.  The shape of the shield may identify a woman or a country of origin.

The blazon (description) of a coat of arms follows a very specific set of rules which are universally followed.  These rules result in the depiction of a coat of arms which can be described in detail without the benefit of a picture, drawing, or the use of colors.  Examples include Tinctures which describe a limited palette of colors and patterns, Hatching uses lines and dots to indicate the metals and colors of a coat of arms, Charges identify symbols (like a cross or a standing lion), Cadences uses symbols to indicate sons on paternal arms in order of birth, Marshalling allows two or more coats to appear on a shield (and may identify marriage partners, children, grandchildren, and marriages to an heiress of arms), Crowns and Helms can denote noble rank, Mottos can help solve puzzles on the origin of family artifacts, Cantons can explain the history of a coat of arms and Crests (which must be associated with a coat of arms) that can provide the link to a family.

Bookplates came about as soon as individuals began owning books.  In the 18th and 19th Centuries bookplates often used a heraldic symbol.  Finding old bookplates with ancestors’ coat of arms/crests might aid your study as would wax seals used by your ancestors.  These bookplates and wax seals can help to identify marriage partners, grandparents, etc.

Tomb art can be a helpful heraldic source.  Coats of arms/crests were often displayed and the Tomb inscription may identify the history of an ancestral coat of arms.

Other excellent places to find heraldry of your ancestors would include Visitations and family histories.  Old family pedigrees often displayed coats of arms for significant individuals.

I have reference books on American Heraldry and would be pleased to help  family historians decipher a coat of arms.  I can be found at da3mj4@gmail.com