Cemeteries: Did you know about segregation in Washington's cemeteries? 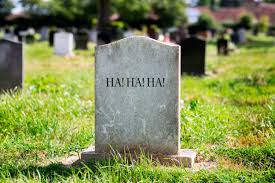 This tombstone might be funny but the story in our Spokesman a few days ago was not.

Washington cemeteries could "refuse burial to any person because such person was not of the Caucasian race. This very court once held that a cemetery could lawfully deny grieving Black parents the right to bury their infant.... we cannot undo this wrong but we can recognize our ability to do better in the future," said the justices in the letter.

Recently, the Washington State Supreme Court reversed that decision, a rule considered irrelevant anyway as federal and state regulations had already made it illegal.