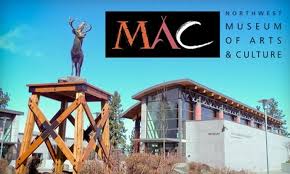 Jim Kershner's "100 Years Ago Today" in this morning's Spokesman, quoted from an article ono 26 Oct 1920:   "The Eastern Washington Historical Society announced its intention to seek federal money to expand its fledgling museum into a large, permanent institution.

"I believe museums are even more important than libraries," said Harl J. Cook of the society. "We should teach our children natural history. At the present time, a child goes out of the schoolroom and doesn't recognize it."

He claimed that Spokane was in the center of the finest prehistoric field in the world and that 'within the next 25 years it will be the most popular hunting ground for ancient fossils on the entire continent."

Well, I don't know about that, but I do remember going to the museum in about 1957 and being mesmerized by the gem/mineral/rock collection. It was in an upstairs room in the mansion in those days. Anybody else remember those wonderful specimens? Wonder what happened to them????