Susie Elliott Faubion was EWGS President for 1952 and 1953. Susie was born in Wheeler South Dakota in 1891 and died September 9, 1980 at the age of 88. In 1917 she married Herman Clifford Faubion. He was a service station operator on Sunset Hill. There is an interesting article in the Spokane Chronicle on Clifford Faubion opposing the freeway through town. His reason is that the new freeway would bypass his service station. 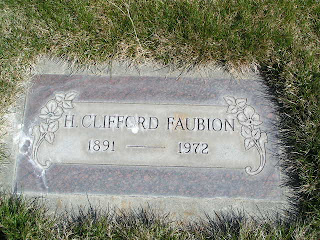 Clifford died March 3, 1972 and is buried in the cemetery at Hartline, Washington. I want to thank the people at Find a Grave for this photo.

Susie was the daughter of Arthur M. Elliott 1858-1937 of Wilbur, Washington and Annie Tanner 1860-1896. Annie was born in Switzerland and died at Livermore, California. Susie was a graduate of Washington State University in 1916. She lived in Spokane for 58 years. Susie was Past Regent of the Spokane Gary Chapter of the DAR, Past President of the Wednesday Club, Past Director of School District #104, a member of the Friends of The Library, a member of the First Presbyterian Chirch, and President of EWGS in 1952 and 1953. Susie also was an EWGS Director, Second Vice President, Corresponding Secretary, served on the scrapbook and indexing committees, and assisted Carrie Lartigue and others indexing the Hartford Times and the Boston Transcriptions, and other scrapbooks. (Editor Note: The Hartford Times and Boston Transcripts were New England newspapers and they had a genealogy column that answered queries including sources on where to find the answers.) Susie and Clifford had three children; sons Dwain C., and Stanley E., daughter Patricia. 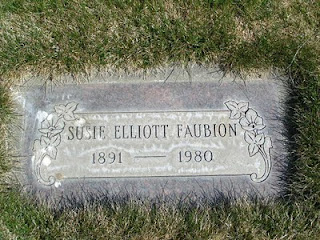 The Bulletin volume 16 page 52 has a nice memorial for Susie Faubion "Although few current members knew her as some of the older ones will remember her, we will all be reminded of her by the services she gave to the Society in the projects she worked on now available for us all for use in our research that can be found in the Genealogical Room of the Public Library. A member who participated in the Society as actively as Mrs. Faubion did is sure to be missed by us all." Susie was also buried in the Hartline Cemetery. Again thanks to the Find a Grave people.

Comments by Carrie Lartigue: Mrs. H.C. (Sue) Faubion was a rather shy lady who preferred to stay in the background.. her deeds were kept at a low profile. During the years of the big "Scrapbook Project" she met with us faithfully each Tuesday and worked from 9 am to 3 pm...made gallons of paste and furnished cash to purchase part of the 150 scrapbooks needed. We lost a good friend when Sue died. It was during her administration that I (Carrie Lartigue) became a member of EWGS.
Posted by Charles at 10:10 PM