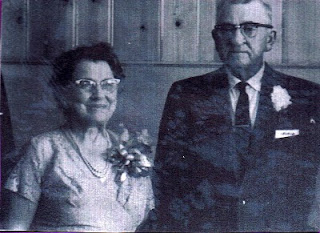 Edith Webb Nelson was EWGS President in 1954 and 1955. She was born December 12, 1885 at Frankford, Missouri, daughter of Elisha Alexander Webb (1855-1939) and Sarah Ann Keeler (1858-1920). Both of her parents are buried in the Hartline Cemetery. The Webbs were from Virginia by way of Tennessee, Kentucky and Missouri. The Keelers were from New York and eventually England. Edith was educated in Missouri and at Washington State College at Pullman.

In 1911 at Hartline, Washington Edith Webb married Stuart Reeves Nelson (Edith and Stuart Nelson in picture). Edith and Stuart had two sons; Vernon N. & Norman Dennis; two daughters Ruthe Isabelle and Edith Marguerite. Edith died February 24, 1967 and is buried in Goldenrod Cemetery Tekoa, Washington. Stuart remarried after Edith's death to Margaret M. Korey May 9, 1965 at Spokane. Stuart died September 5, 1975 and is also buried at Goldenrod Cemetery, Tekoa, Washington. Edith had been EWGS Librarian 1948, and on the board of directors for several years.

Comments by Carrie Lartigue: Edith Nelson also helped with the scrapbooks until her health began to fail. Her home was open to EWGS members for a picnic in August for several summers. Meetings have always been first Saturday of each month , September through June. These summer outings, (pot luck) brought the members closer together and was a time for sharing in reports of progress made in their search. I remember three picnics at the Nelsons, two at the Lartigues and several at the Clumpners. Edith was 81 when she passed away.
Posted by Charles at 11:11 PM