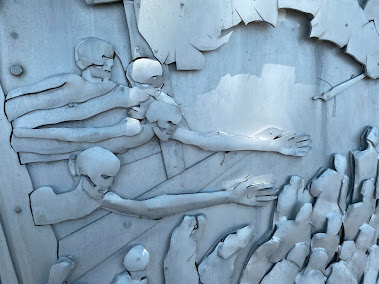 Last June I flew to Kansas City, Missouri, to visit family. While there, Sharon took me to Union Station's Auschwitz Exhibit. We spent nearly 3 hours walking through this sobering and educational exhibit. Then we went to the nearby Jewish Community Center where in the 1950s many surviving Jews relocated to Kansas City (home of Harry Truman who they revered). An large aluminum sculpture graces the grounds.
My photo shows only a small portion of this sculpture. It was meant to show the dead Jews reaching out to be remembered. That it does.
I mean no sacrilege but I also see any dead ancestor reaching out to be remembered.
Posted by Donna at 8:30 AM