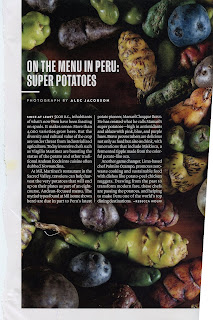 The potato (Solanum tuberosum) belongs to the solanaceae family of flowering plants. It originated and was first domesticated in the Andesmountains of South America.

The potato is the third most important food crop in the world after rice and wheat in terms of human consumption. More than a billion people worldwide eat potato, and global total crop production exceeds 300 million metric tons.

There are more than 4,000 varieties of native potatoes, mostly found in the Andes. They come in many sizes and shapes. There are also over 180 wild potato species. Though they are too bitter to eat, their important biodiversity includes natural resistances to pests, diseases, and climatic conditions.

Potato is vegetatively propagated, meaning that a new plant can be grown from a potato or piece of potato, called a “seed”. The new plant can produce 5-20 new tubers, which will be genetic clones of the mother seed plant. Potato plants also produce flowers and berries that contain 100-400 botanical seeds. These can be planted to produce new tubers, which will be genetically different from the mother plant.

Potatoes can grow from sea level up to 4,700 meters above sea level; from southern Chile to Greenland.

One hectare of potato can yield two to four times the food quantity of grain crops. Potatoes produce more food per unit of water than any other major crop and are up to seven times more efficient in using water than cereals. They are produced in over 100 countries worldwide.

Since the early 1960s, the growth in potato production area has rapidly overtaken all other food crops in developing countries. It is a fundamental element in the food security for millions of people across South America, Africa, and Asia, including Central Asia.

Presently, more than half of global potato production now comes from developing countries.

History of the potato

From Wikipedia, the free encyclopedia

The potato was first domesticated vegetable in the region of modern-day southern Peru and extreme northwestern Bolivia[1] between 8000 and 5000 BC.[2] Cultivation of potatoes in South America may go back 10,000 years,[3] but tubers do not preserve well in the archaeological record, making identification difficult. The earliest archaeologically verified potato tuber remains have been found at the coastal site of Ancón (central Peru), dating to 2500 BC.[4] Aside from actual remains, the potato is also found in the Peruvian archaeological record as a design influence of ceramic pottery, often in the shape of vessels. The potato has since spread around the world and has become a staple crop in many countries.

It arrived in Europe sometime before the end of the 16th century by two different ports of entry: the first in Spain around 1570, and the second via the British Isles between 1588 and 1593. The first written mention of the potato is a receipt for delivery dated 28 November 1567 between Las Palmas de Gran Canaria and Antwerp. In France, at the end of the 16th century, the potato had been introduced to the Franche-Comté, the Vosges of Lorraine and Alsace. By the end of the 18th century it was written in the 1785 edition of Bon Jardinier: "There is no vegetable about which so much has been written and so much enthusiasm has been shown ... The poor should be quite content with this foodstuff."[5] It had widely replaced the turnip and rutabaga by the 19th century. Throughout Europe, the most important new food in the 19th century was the potato, which had three major advantages over other foods for the consumer: its lower rate of spoilage, its bulk (which easily satisfied hunger) and its cheapness. The crop slowly spread across Europe, becoming a major staple by mid-century, especially in Ireland.