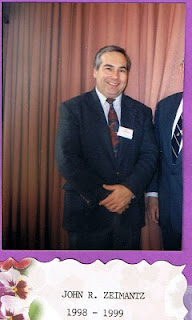 John wrote the article on the history of EWGS from 1955 to 1964 for the 50th anniversary issue of The Bulletin, which helped me in these posts on EWGS presidents (thanks, John!) Since John is an attorney, he has given many talks on courthouse research, held many offices for EWGS, and was chairman of a couple of seminars that EWGS held.

Nineteen ninety-nine was a busy year, as the spring seminar was presented by John Kitzmiller on April 10, 1999 with the topic, Your WISE Emigrants (Welsh, Irish, Scottish and English). It was at Spokane Falls Community College and the cost was $25.00.

In September, EWGS was again at the Sprague Rest Stop for a fund raiser, but this time we were inside as DOT had built a room for the volunteers to put their supplies. It it had a sink and even heat for the cold mornings, much better that being outside like the last rest stop we did two years before. EWGS cleared $1100.00 at the rest stop for the book fund.

The October 2, 1999 workshop's presenter was Merrill Mosher and he spoke at Spokane Falls Community College; the cost was $20.00. A couple of weeks later Arlene Eakle was in Spokane on October 16, 1999 at the Driscoll Baptist Church; cost for that seminar was $20.00.

If you read the newspapers, magazines and even The Bulletin, this was the end of the 1900s and everyone was worried about Y2K and whether that would be the end of the world, or would it just mess up computers everywhere. It turned out to be a non-event as programmers got enough advance notice to fix nearly everything.

Before John even became EWGS President, the longtime researcher for EWGS had resigned. Ray Fisher was having health problems and needed to slow down. I had been doing some lookups online, so I asked John if I could replace Ray as the new EWGS Researcher. John told me no one could ever replace Ray, but I could try the research job for a year on probation. Guess I passed the probation as I still hold that job. Thanks John, for your confidence in me!
Posted by Charles at 8:24 AM