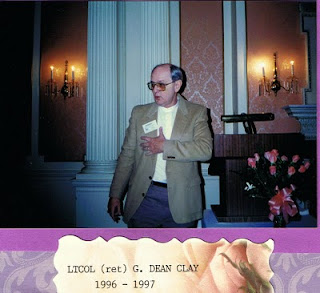 Gordon Dean Clay was EWGS President 1996 and 1997. I don't ever think Dean used his first name so I won't either. Dean was born in Council Bluffs, Iowa to Roy Stanley and Agnes (Hart) Clay. He went to school in Council Bluffs and Creighton University. In his senior year of college he joined the United States Air Force as a second Lieutenant. He flew in both Korea and Vietnam. On July 10, 1954 Dean married Constance Marvel Eyerman. Connie was born in Long Beach, California to Fred and Inez Eyerman. They had a son Paul and two daughters, Rebecca and Constance (Stacy) Clay. In 1957 Dean flew the very first B-52 to Fairchild Air Force Base and was an instructor there until he was transferred to Torrejon, AFB in Madrid Spain. In 1968 and 1969 he flew in Vietnam, and retired from the Air Force in 1970 as a Lt. Colonel. Dean completed his undergraduate work at Eastern Washington University and then went to law school at Gonzaga School of Law, graduating in 1974. Dean was President of the Inland Empire Kennel club (they raised Cocker Spaniels), chaired the Christian Businessman's Association, and he was a member of the Sons of the American Revolution, Dadealions, The El Katif Shrine, Council Bluffs Masonic Lodge and the Elks Lodge of Council Bluffs.
I don't know if it was Dean or Connie that rescued the work of the American Legion, but the American Legion had been collecting information on all the veterans buried in Spokane County. They started in the 1930s and kept collecting till about 1954, the Legion made a 3x5 card for each veteran, located the burial plot, sometimes looked up an obit for the veteran and listed the war the veteran had served in. The American Legion was going to throw out all this work because it was just taking up space and had not been updated since the 1950's. Connie was the extraction chairman of EWGS and as such she had the cards filmed and indexed the work done by the Legion. Thanks Connie.
The 1996 Spring seminar for EWGS was Patricia Law Hatcher at the Crescent Court April 20, 1996, cost $22.00. In June Dean hosted the first EWGS Retreat, they talked on increasing members for EWGS and updated the bylaws for EWGS. The October workshop was October 5, 1996 at Spokane Falls Community College, cost $22.00.
The 1997 Spring seminar was James L. Hansen (No relation) at the Inn at the Park, cost $30.00.
June 21 and 22, 1997 was my first rest stop. I wrote an article for the September 1997 Bulletin on my experiences there. EWGS cleared about $1500.00 for the book fund. Dean and Connie were there and here is their picture at the rest stop that I posted a while back.
Dean held another Retreat and they had a good meeting but were rather short of participants. The October workshop at Spokane Falls Community College was Kathleen W. Hinckley on October 4, 1997, cost $25.00.
Both Dean and Connie have passed away, Connie died August 7, 1999 and Dean on June 27, 2003. Both will be missed. Besides volunteering at the rest stop Dean appointed me to my first EWGS committee, the Distinguished Service Members committee, to pick an EWGS member to be a Distinguished Service Member. Turned out we did not recommend anyone. Thanks for having faith in me Dean.
Posted by Charles at 8:13 AM