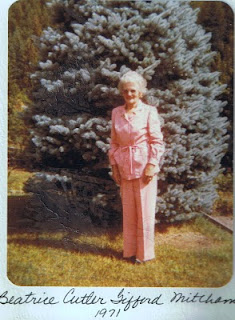 Beatrice Cutler Mitcham became EWGS President in the middle of 1970 when Jane Webster moved to Montana. Beatrice--known as "Boo" to her friends--continued on through 1971 as EWGS President. Beatrice was born in Spokane in 1914 to Truman Milton Cutler (born in Minnesota) and Beatrice Fairchild (born in Nebraska). Her parents were married in Hillyard March 18, 1908. Beatrice went to school in Spokane and married Clarence R. Gifford in Spokane December 29, 1934. They had two sons, Robert and Ronald Gifford.

On September 2, 1961 Beatrice Gifford married Clarence E. "Mitch" Mitcham. He was born May 1, 1901 in Peoria, Oklahoma Territory, son of John Belve and Mary Orlena (Allen) Mitcham. He moved with his family to Ritzville, Washington at age two, then to Turner Bay, Idaho and finally to Hayden Lake, Idaho in 1915. He worked in the mines in Philisburg, Montana and then moved to Spokane and worked for the Great Northern Railroad for 45 years. In 1922 he married Dorothy Ellen Benson and they had John, Bonnie, Barbara, Beverly and Clarence, Jr. In the 1930s he bought property near Mt. Spokane, established a sawmill and built their home. Nearby Mitch and his son John built the famous Mitcham Dance Hall, opening date July 2, 1938. Western Square Dancing was started in this area at this dance hall.

Comments by Carrie Lartigue: "Mrs. Clarence (Boo) Mitcham served 1-1/2 years. Boo and her husband "Mitch" traveled thousands of miles, collecting data on their families. They also helped copy tombstone inscriptions when that project was going. Boo had several committee meetings at her home at the base of Mt. Spokane and donated 15 years worth of EWGS Bulletins to the society."
Posted by Charles at 9:45 AM