Mabel Rue Frederick was Second Vice President in 1958, and became president after the untimely deaths of Guy Alfred Clumpner and Grace Ellis Woodward. She also was president in 1959 and 1960 and so became the longest serving president of EWGS. She was born in Spokane at the home of her grandfather Col. David P. Jenkins, August 19, 1885. Col. David P. Jenkins was a lawyer and he was the first settler on the north side of the Spokane River when he came to Spokane June 3, 1979 from Illinois. Col. Jenkins was born in Mt. Pleasant, Ohio in 1823. Practiced law in Illinois, was a friend of Abraham Lincoln, a Civil War Colonel for the Illinois Volunteers. He started the Spokane University, donated the land for the Spokane Courthouse, built a getaway cabin in Stevens county (Jenkins High School is named for him), refused to give land to James J. Hill for the Great Northern Railroad, but sold the land where the present day Kendall Yards is located to the city leaders who then gave that land to the railroad. As a note Spokane University was located south of the courthouse, but did not last long, but the street in front of the University was named College Avenue, and that name survives to today. Mabel's grandfather Lewis Rue was from New Jersey. 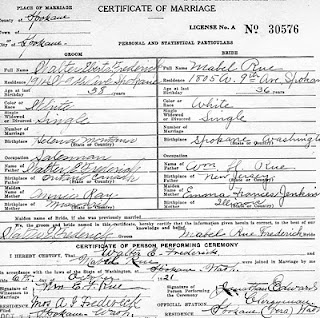 Mabel married October 6, 1921 in Spokane, Walter Eberts Frederick (1882-1936) born at Helena Montana and died here in Spokane June 1936. He was an office supply clerk for Shaw-Borden printing company. Mabel was a charter member of Spokane Garry Chapter of the Daughters of the American Revolution and was named Woman Pioneer of the Year in Spokane in May of 1975. Mabel died in Salt Lake City January 19, 1980 and is buried at Fairmount Cemetery.

Comments by Carrie Lartigue: Mrs. Walter E. Frederick. Mabel was the granddaughter of early Spokanite - Col. Jenkins. He donated the land on which our Spokane County Courthouse stands. Mabel was a dedicated genealogist and active in the Daughters of American Revolution. Mabel moved to be near her Doctor son in Salt Lake City in her later years. She gave me some clothes worn by her grandmother in 1848 before the Civil War. A neat treasure for me!
Posted by Charles at 9:57 PM