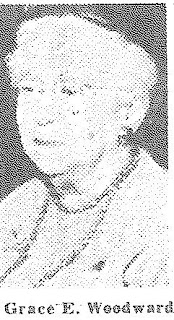 Grace Estine Ellis was born August 25, 1879 in Dayton, Washington the ninth child of Samuel George Ellis (1832-1904) and Rhoda Ann Kennedy Ellis (1836-1904). Samuel was born in Virginia and was a Pioneer of Walla Walla in 1862. Rhoda was born in East Tennessee and died in Spokane. Her family was from Ireland. Rhoda's father John K. Kennedy was the captain of the wagon train to Walla Walla and the Ellis family came by ox team. Grace was selected to be EWGS President after the untimely death of Guy Alfred Clumpner in April of 1958, and she also died before her term ended, July 9, 1958. She was cremated. Grace had joined EWGS in 1953 and was also a member of Electra Chapter of OES and the Daughters of Pioneers. 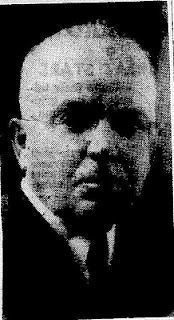 Grace married Dan Marshall Woodward September 30, 1900 here in Spokane. Dan was the son of Henry and Margaret (Thompson) Woodward. Dan was born on the family homestead in Winona, Minnesota, still owned by the family, April 15, 1863 and he died here in Spokane June 8, 1937. He was the department manager of books and stationary for John W. Graham and was recognized as the leading athority in the west on fine paper.
The 1929 Spokane City Directory has an add from the John W. Graham & Co. Office Supplies, Office Desks, Chairs and Filing Equipment. 707-711 Sprague and 708-716 First Avenue, Spokane, Washington.
Posted by Charles at 9:09 PM