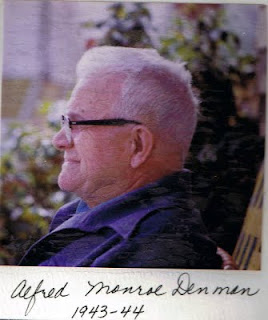 Alfred Monroe Denman was EWGS President 1943-1944. He was born in Spokane son of Monroe Denman a farmer in the Hillyard region. Monroe was a fifth generation descendant of Scotch and North English descent and was born March 10, 1858 in Morristown, Minnesota. Monroe married Esther Piper in Spokane September 14, 1884, she was born May 31, 1864 near Lester Prairie, McCloud county, Minnesota, third daughter of William Enos Piper (1837-1928) b. Horatio, Pennsylvania died Spokane and Sarah Ellen Mayze (1843-1933) b. Marionsville, Pennsylvania died Spokane. Both of Pennsylvania Dutch descent. Alfred Denman married Lillie Rose in 1914 a native of England.


The obit for Monroe Denman says he was the Oldest Spokesman-Review carrier and his route covered 75 miles daily. He was 73 when he died in his car. Lilly Rose died July 27, 1968. Alfred Denman died December 28, 1979. Lillie, Esther, Monroe and Alfred Denman are all buried in Orchard Prairie Cemetery. Alfred Denman was also a member of the Spokane Public Library Friends of the Library.

Comments from Carrie Lartigue on Alfred M. Denman: "He was a determined man and good researcher. He was into many organizations; Sons and Daughters of Washington Pioneers, S.A.R., and others. He was especially proud that he still lived on the old family homestead in the Hillyard area."

Received this note from Deloris Biegler and she gave me permission to post it here:


Hi, I found the article on the Denmans' very interesting, you see Alfred Denman drove the school bus I rode to Arlington grade school; on to Rogers High School, during the late 1940's; 1950's. Mr Denman may have been one of the very first that cultivated my lifetime interest in History; later on Genealogy.

One of my first memories instilled even today was Mr. Denman telling me how he still lived on his family's homestead that sits just above the road that curves off North Freya and onto join Market street to the east. I have never passed the old homestead sitting above the north side of the curve in the road, with out thinking of Mr. Denman. He told how his father's homestead was chosen to enable the family to observe any Indians that might approach the place. Just recently, I have noticed the new North highway being built is encroaching right through Mr Denmans old homestead. This has made me very sad to think about. Mr Denman was very proud of his roots in that area.

Once Mr Denman discovered my father's family the Gardners settled on Pleasant Praire [in the] 1880's, Mr Denman would speak of old timers in the foothills north; east of Hillyard as if I could recall them, I wasn't born until 1942. Now that I read of Denmans roots; see his father was married to daughter of Pipers, I recall my father pointing out the old Piper homestead on Bigelow Gulch road that heads across the top of the prairie joining the road down to Millwood. This old home sat vacant all the time I was growing up. The trees grew up around it; made it quite scary looking to children. When we rode our horses by there we did so swiftly. In the last 20 yrs or so, someone restored that old homestead; it now looks great.

Those foothills are steeped in Spokane county History. Years ago when the original old wooden, St. Michaels Mission was moved out to Spokane Falls Community college. While growing on the edge of Bigelow Gulch in the 1950's, all us kids with horses would ride to the old Mission, tie up our horses; picnic, it was such a beautiful peaceful place. Never was there any vandalism, garbage or trash laying around. That was a wonderful time to grow up when remnants of history still remained; children were taught to respect them all. Passing by the location today breaks my heart, sitting askew by the ditch, is only a monument noting the location where many Indian people received their first communions, close by with brush grown over are graves of native people that once inhabited the foothills; southern Peone Prairie. The descendants of those buried there I believe for the most part moved onto the Flathead Reservation of western Montana along with Baptiste Peone, some did move to Fort Colville. Spokane co. land records show Baptiste's sale of his land on the southern edge of Peone Prairie, Indian records show Peones living on the Flathead reservation, after leaving the Spokane area.

Mr. Denman came off as a grouchy ole character as I remember, but he ran a tight ship on the school bus all those years. I think he had to come off in the former light to remain in control of a bunch of rowdy kids. However once those same kids boarded the ole yellow school bus, at times traveling over some pretty icy roads, they towed the line the entire trip to and from their school. I was either the first or last to climb on his bus in the mornings; visa versa when going home in the afternoons. I had the choice of getting on first or waiting for the bus to travel its route; then pick me up on the way by as it passed by my home on the corner of Francis; Freya, once a Stockyards, close to the Great Northern cattle loading pens, with several homes on the property. Therefore many times I was on Mr Denmans bus alone, the gabby kid I was; I'm sure I climbed up in the seat behind Driver Denman; talked his leg off. I think of him fondly today; would love to walk over his family's homestead with a metal detector, knowing what is occurring there now I know in my heart Mr Denman would appreciate my interest.