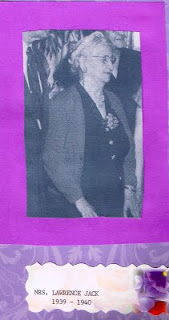 Susan Marie West Jack was the third EWGS President, she served 1939 and 1940. Susan was born February 14, 1878 in Iowa. Susan Marie was the sixth child of Francis Marion West born 12 March 1845 Franklin County Indiana, and Jemima Harvey born 12 January 1848 and died 10 July 1932, and granddaughter of Stephen Harvey born 6 October 1811 and Susanna Lee born 10 July 1827 and James Lytle West born 22 December 1815 in South Carolina, and Susan West of Brookville Indiana. While her surname is the same she is from a different West family. The Harvey and Lee families were from upstate New York, and the West family was from North Carolina area but believed to be from early New England West families (no sources on this last statement so take it as a suggestion for further research). 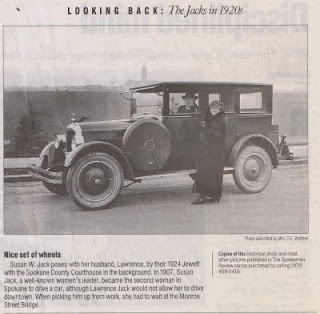 Susan Marie West married Lawrence Jack in Altoona, Iowa 2 May 1906 and they came to Spokane the same month. Lawrence Jack was born in Bruce County Ontario Canada 22 March 1876 and he died 25 August 1926 here in Spokane. In the 1915 City Directory Lawrence was listed as a lawyer 610 Hyde Building. I checked for his obit and did not find one. They had one son Lawrence Jack Jr. born 22 March 1907 here in Spokane.

Susan died 25 August 1975 at Bainbridge Island Washington. Her granddaughter Suzanne M. Gordon lived at Bainbridge Island. She was a member of Women of Rotary, Eastern Washington Genealogical Society (past President of both of these), YWCA, Cultus Club, Liberty Park WCTU, Daughters of American Revolution, and co-founder of Spokane Public Library Friends of the Library. She is buried at Riverside Cemetery.

Comments on Susan Jack , by Carrie Lartigue:  "Susan was a charter member and traced her lines back to the Robert E. Lee family in Virginia. She generously gave of her books and talents. I have as personal keepsakes from her; several hand-painted plates."
Posted by Charles at 6:46 AM