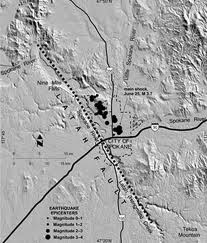 Wanting today to show you that the past issues of our Bulletin are still viable, vital and certainly interesting. In the March 2008 issue I had an article about our area's earthquake zone and how on June 25, 2001, at 7:15 in the morning, a 3.7 magnitude earthquake rumbled through Spokane. And over that next week, and in the weeks to follow, a swarm (term used by seismologists to describe a bunch of smallish earthquakes that are close in magnitude) of 101 earthquakes occurred in Eastern Washington. That big one, on June 25th, was centered under Gonzaga University. Were you living in town then? Did you realize what had happened?

My point it, don't toss out all your old issues of the Bulletin. At least page through them and look for once-again interesting articles to read and share. Idea? (All the past issues are on the shelves in the Genealogy Room of the downtown Spokane Public Library.)

If you want to know more about that quake and any other in the area, Google Washington Geology, Vol. 29, Nos 1-2, September 2001. Very interesting read. In fact, the image used in this post (which I found in Google images) came from that book.
Posted by Donna at 2:16 PM

I did not feel that one but was in the library a while later when I think it was a 2.5 aftershock hit. The library sways real neat on an earthquake. :)

As a resident of the south hill that summer, I definitely felt the quake. Later, when returning to work as J. E. Ferris H.S. Librarian, I discovered a small machine in the old libriarian's office. I was told it was placed by WSU as a register for any more quakes, aftershocks, et. I believe it was still there when I retired in 2002.