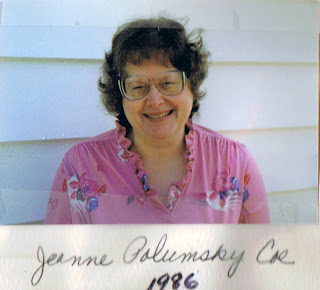 Jeanne M. Polumsky Coe was the second Jeanne in a row and EWGS President in 1986. Jeanne Coe was born in Lewiston, Nez Pierce county, Idaho. February 4, 1961 Jeanne married Larry Andrew Coe and he was born in Coeur d'Alene, Kootenai county, Idaho. Son of Beryl Edward and Mary Francis (Holmes) Coe both of Nebraska. Larry was a baker for Safeway. Jeanne was the daughter of Lawrence Edward and Audrey Elizabeth (Kuther) Polumsky. Jeanne is a true daughter of Washington Pioneers. She had several ancestors residing in Garfield and Asotin counties prior to statehood in 1889. Her maiden name Polumsky was spelled differently on early censuses. Some of those are: Polanski. Polumskia, Polinsky and Polensky. Her marriage certificate at the digital archives was spelled Polemsky (may be corrected by now.) Jeanne was not sure where her Polumsky family came from in Europe. One census says Poland, another Prussia and another German. She also has some Irish roots in the Anderson and McGaughey families.
Jeanne was a county worker in the Spokane County Clerks Office, but is now retired. If you do any research in the eastern Washington area you will probably run into a book or database indexed by Jeanne. She continues to index for both the Washington State Library and for Family Search. She has also been a contributor of newspaper extractions for the Bulletin since the 1980s. She has also volunteered for many projects for EWGS and is still very active in EWGS.
I first knew Jeanne when I took over research for EWGS as a worker in the Spokane County Clerks office. She would look up file numbers for me in the microfilmed indexes in the clerks office, and we have been friends since then.
Posted by Charles at 10:00 AM